Too early for Ladywalk & Whitacre

After the excitement of seeing the bittern yesterday, I thought I’d try somewhere a bit different today. I headed for Ladywalk, which also has bitterns over winter (though none yet, as far as I know), but has got a decent feeder hide set up, which I aimed for upon arrival.

Walking down the main path, I saw a few redwings and fieldfares (I think, as I was looking into the sun, somewhat), but they were gone before I could raise the lens.

From the hide, alas there wasn’t much around, well, nothing special anyway. Marsh (or Willow; I ought to work these out soon) tits, blue, great, long-tailed tits, gold and greenfinches, a few wrens, chaffinches, a robin, some reed buntings and the occasional visit from a great spotted woodpecker.

However, with a shriek of alarm from the birds, the star of the show arrived, and for once, perched for a moment for me to get some shots. A male sparrowhawk, with gorgeous bright yellow eyes. I managed a couple of shots before he took flight, swooping low over the ground, and then off across to the lake behind, to scare the wildfowl. 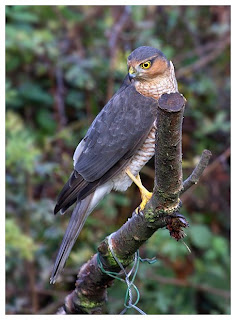 I waited for about an hour in the hope that he’d return, and he did... but this time only for a second, whizzing through the area, causing a disturbance, and off again into the woods. Time to leave, I thought.

Being up that way, I drove over to Whitacre Heath, but after donning the wellies and plodding out to the woodland hide, I discovered that it was a) too dark for photography (still too many leaves on the trees) and b) the feeders weren’t stocked up.


After chatting to the only other person on the reserve, I shall try to remember to bring some seed next time, as it’s down to the deep pockets of the members to keep the feeders filled, because the Trust doesn’t assist. Bit of a poor show from them, if you ask me!


I'll leave it a while before heading back to either - they're definitely places to head to in the winter... no mozzies either!

With the forecast for Saturday being half sunny (morning) and then rain later, I dragged myself out of bed, and opted to head to Upton Warren, as Kay & Max said they’d likely be there, searching for the Shore Lark.

Walking along the path to the hide, a green woodpecker zipped along the tops of the reeds, and off into the distance (like they always do!). As expected, Kay & Max were indeed in the hide, though after spending an hour searching, they’d decided that the lark was either having a lie in, or had gone.

I squeezed in on to the bench, and had a quick look, but to no avail, but we did manage to see the lesser spotted Fritz, who was out for the day, after having battled with public transport down to the reserve.

With Kay shivering, and no sign of the lark, we all decided it to head over to the Moors instead – perhaps the bittern would make an appearance! We weren’t disappointed – within minutes of getting into the West Hide, I managed to make out the bird amongst the reeds near the sluice gate, and apart from Kay, we all had a good view of it, as it crept along the channel.

Staring at the reeds for a while, Kay, Max and Fritz decided that they’d rather go over to the other side to see if they could spot the jack snipe reported recently, leaving me in the hide, hoping for a better, clearer view of the bittern.

If only they’d stayed for 10 more minutes. Out it came, and posed on some cut down reeds, for almost 5 minutes! I’ve never seen one out in the open before, and filled the card with shots of it! Super stuff! It mooched around, seemed to peck at something small and consume it, before flying back into the reeds. 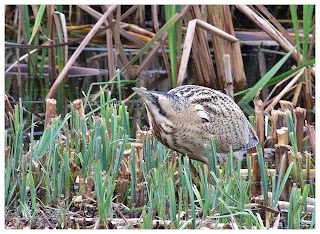 Moments later, it launched out, and flew over to the other side, so everyone got a good view of it.

After wandering over to the East Hide to join the others, we all saw it again take flight, this time pursued by black-headed gulls, across to the car-park corner, where it dived into the reeds, and disappeared from view. 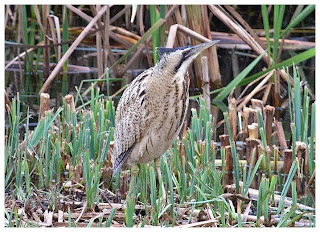 All the bittern images (including a couple with a water rail in the reeds behind it) are now on my gallery.

Belvide and a pair at Upton

I've typed this in once, so alas it's going to be short this time. Maybe that's for the best!

Saturday was never going to be an early start, after sampling the delights of the Black Country Ale Festival, at the Coach & Horses, the night before. Keen to get my money's worth from my WMBC membership, I aimed for Belvide, which unlike Blithfield and Ladywalk, offers something decent for photographers.

It was a bit too cloudy for shots at the woodland feeders, so I headed to the feeder hide by the water, and was pleased to see nuthatches, marsh?, long-tailed, blue and great tits, chaffinches, a wren, a robin, pheasants, tree sparrows and a sparrowhawk making occasional sorties. 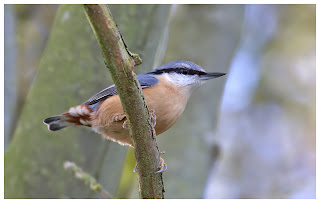 Down at the new hide, I could see the flock of golden plovers, but they were too far for anything other than a record shot. New bird for me though.


Heading back, I opted to drop into UW, and was pleased to be told that there was a Shore Lark over at the Flashes. I hot-footed it over, and found the hide as busy as when the Wilson's Phalarope was there - like a scrum!

Soon located the bird, and it was accompanied by a rock pipit - another rarity for the area. Unfortunately, the lark was too far for a decent shot, though Rob Smith with his 1600mm set up managed some good shots.

So in terms of new birds, I'd got 2 for the day, though in terms of images, the shots of the nuthatch had made my day. The gallery will be updated over this week, work permitting. I'll probably add some images in here too...
Posted by Pete Walkden at 14:00 No comments:

After typing in a long blog entry for the weekend, it somehow lost it, and now I have wasted 40 mins I can't afford to lose. Auto draft saving doesn't seem to allow you to select the last draft after it's gone either. Not impressed.
Posted by Pete Walkden at 13:56 2 comments:

What a lovely weekend that was. Despite the forecast of rain for Saturday, I thought I'd try for the drake common scoter that had been seen daily at Draycote Water for the past week or so. Being popular with joggers and cyclists, I dragged myself out of bed early, and was at the lake just after sunrise. Stunning sunrise it was too, shame I was driving!
The carpark was almost empty, so I got a good spot near the top, and set about walking towards the Valve Tower, in search of the scoter. The morning sunshine was golden, and the lake and everything on it was lit up beautifully.
Most of the birds were close to, or on the shore line, though I couldn't see my target bird. Nevertheless, the sight of a pair of cormorants perched on a rocky jetty, bathed in the golden light casting reflections was too good to refuse. First pics of the day! 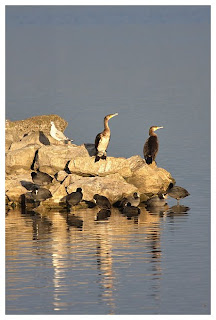 Around by the Valve Tower, there were masses of tufted ducks, coots, lapwings and a few gulls, but no sign of the scoter. In the fields nearby I heard the distinctive call of a green woodpecker, and there were meadow pipits and pied wagtails galore. Down by the water board buildings, I spotted a kingfisher zipping along the reedbed, and a quick wander down yielded more sightings of it, plus a pied and grey wagtail and a passing great spotted woodpecker.

A quick call to Steve Seal (cheers) led me to realise I'd gone too far, and that the bird had been seen towards Rainbow Corner, so I wandered back...

Alas it wasn't to be my day. Several other birders I met had also failed to see the bird, and I eventually opted for some pics of the immature shag instead. Oh well, maybe next time. Though I did manage a couple of nice wren shots. So not a total loss.

After Draycote, I headed to Brandon Marsh, for the obligatory kingfisher viewing. The Carlton Hide was inhabited by the usual suspects, and we didn't have to wait too long to see the star - this time a female. Got a couple of shots before she headed off.

Also took the opportunity to get some pics of a grey heron fishing - though trying to anticipate it striking, was rather hit and miss, much like its fishing success.

Before leaving I popped over to the Teal Pool, but the black tailed godwit was too far off, and the light was all wrong anyway.

Sunday - I was considering trying for the scoter again, as it was apparently still there (hiding!), but a sighting of a bittern at Upton Warren changed the plans at the last second. Heading down the M5, I was greeted to the sight of a flying caravan. Not what you expect to see, and it wasn't nice to see it tumble along, spinning the car with it. Looked like the driver got out okay, though he was obviously in shock. Didn't see the cause, and there were a few "stoppers" already, so I headed on down to the reserve.

After getting to the West Hide, one of the spotters told me where he'd seen the bittern, and that there was a second (he thought) in the reeds to the right of the hide. Despite searching, we couldn't locate it. Then all of a sudden, it took flight from the reeds, across and down to the far side of the lake, near the car park. Typically, the focus wouldn't lock on, and I got some very blurred shots.

Deciding to spend the day there, I set up camp in the West Hide, and got to see the usual feeding tits, pesky squirrels and hear the occasional Cetti's calling. Not until I'd moved to the "Spider" hide, did I get to see the other bittern. Spotted by a lady also in the hide, it was sat on the edge of the reeds on the other side, plain as day! Didn't stay out long, and soon disappeared.

Moving back to the West Hide again, news had obviously got out, and I was soon joined by lots of keen folk. For once, the bittern performed, coming out of the reeds, and then flying across to the corner to where the other had gone. And at the second time of trying, I managed to get a half decent shot or two. 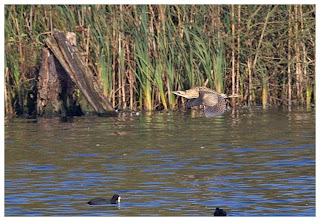 Superb. See my gallery for all the shots from the weekend.