As a child, snow was always exciting and somewhat magical. Before even peering through the curtains, you'd know it was out there, from the strange light and silence in the morning. It made the world look like a Fairy Tale and most importantly, usually closed school! As an adult though, it's a pain the neck as work is rarely closed, so I have to fight my way in. That said, the latest fall came late on a Friday night, so by Saturday morning, I knew I could try for some snow shots.

I'd liked to have ventured further afield, but reports of gridlocked roads, crashes and abandoned vehicles swayed me to leave the car alone for a change, and simply enjoy what nature could offer me, in my own back garden. Filling up the feeders and sprinkling food around on the ground (pointless exercise as it was covered in moments!), I opted to sit on the veranda of the summer house, as it's sheltered from the falling snow and hides me slightly from the birds.

Wearing several layers of warm clothing, and wrapped in a bag hide, I waited patiently for the local birds to spot the food. Didn't take long, and soon the feeders were being visited by blue, great and coal tits, chaffinches, goldfinches, house sparrows, blackbirds, starlings and for me the star of the show, bullfinches. 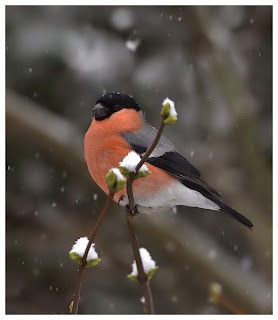 I was chuffed to see three males glowing in the gloom from the blizzard, and I expect they were pleased to see a pair of females also taking the free sunflower seeds. There may a fight in Spring though, unless a third lady arrives! 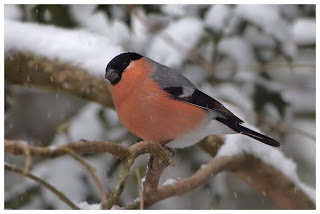 I found myself taking shots of even house sparrows, as they sat on the snowy perches, and who can resist a robin? Not me.

Most of the berries from the hedges around the garden have been eaten already, so the holly bush beside my conservatory is a welcome treat for passing birds, and before I even got outside, I spotted a song thrush and redwing poking about amongst the spiny leaves.

Eventually it got too dull and I was a tad cold by then too, so I retreated back to the warmth of the house, hoping that I'd get similar chances on the Sunday, when the sun was supposed to be shining.

Hmm, Sunday arrived, but the sun must have had a lie in. No matter, I relocated to the back bedroom, and grabbed a few shots of the winter thrushes feeding in the trees and hedges around the garden. 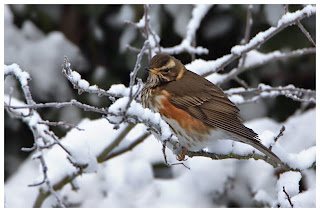 I had to laugh at one fieldfare, when it picked a bright red berry, and had a real game to get it down. 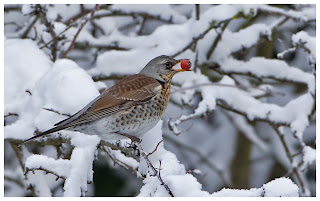 Almost dropped it a couple of times, but eventually forced it down the hatch, and sat looking rather smug for a few moments after. 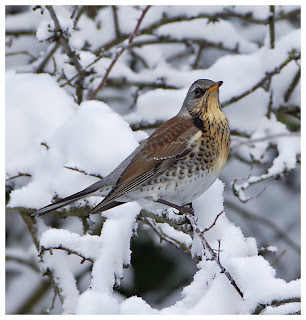 A short spell again in the garden itself yielded surprisingly little - perhaps the birds had been tempted elsewhere. However, I did spot one of the nuthatches, and best of all, given the bad weather and risk for them, I saw a pair of goldcrests picking off bugs from the fir tree.

A good weekend of photography, albeit rather cold and no miles covered at all. Not sure what the neighbours think of me though...
Posted by Pete Walkden at 09:33 No comments:

What dreary weather we've been having lately. Not exactly encouraging us togs to venture out there, when the skies are grey, it's drizzling and not particularly warm either. Saturday was one such day, and despite seeing the bittern flying along the far side of the Moors pool, there was little else to note, though 3 water rails were mooching around near the feeders, scuttling across the iced edges of the lake.

Sunday promised to be better, and I first headed down to Warndon again, after seeing reports of waxwings on the Saturday. Set off in fine sunshine... arrived to find the estate covered in a blanket of thick fog, and no sight nor sound of the birds. Bugger. Oh well, checking on other sightings, I found myself down at Pershore, in even denser fog!

Over to Evesham next, and no birds and more mist. This was starting to annoy me, as the morning was almost gone, and I'd not seen a thing. Finally I decided to try to find the birds reported on an industrial estate over in Alcester, which turned out to be the same spot as I saw a black redstart earlier in the year.

Whilst cruising around the estate, I spotted something unusual on a factory roof, and did a double take... a red legged partridge! Fancy that! I did, and pulled over to get some shots. It seemed a bit confused to be up there and not in a pear tree at this time of year, but managed to show some seasonal magic by vanishing when I tried to reverse the car back for a better view. 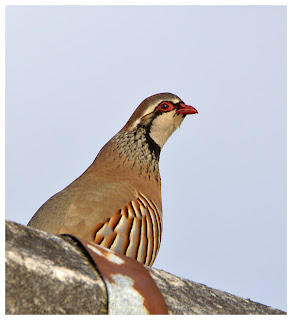 Heading towards the River Arrow, I clocked a very encouraging sign. I say "sign", but really mean a person. Dave Hutton, who had been photographing the flock of waxwings for a couple of hours. Parked up and waited.

There were 28 birds (Dave counted, as I'm useless at flocks in flight) and they were initially on a small circuit between a tall tree beside the river, and several small berry trees by some flats. It was good because the berries were of different colours, allowing (when the birds descended) us to get shots on each. 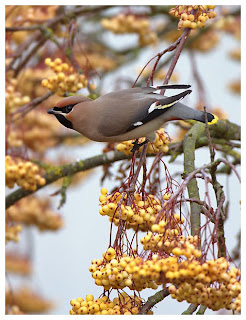 As luck would have it, within about 20 mins of me getting there, the clouds amassed and the light rapidly left. Along with Dave, who said Stella was calling for him... 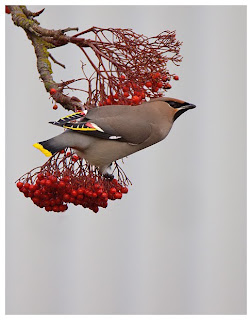 I stayed on for a while longer, chatting to locals and other togs, and trying to keep warm, though compared to recent weeks, it was almost tropical! Still cold after a while though, and the birds started to spread out around the estate, taking longer to return. That was my cue to leave, but not a bad day in the end. Fingers crossed that the sun will show itself one weekend soon, while these wonderful birds are still around for more pics.
Posted by Pete Walkden at 08:45 1 comment: