Last Monday was supposed to be the most depressing day of the year, but I think this weekend beat it, given the 3 days of glorious sunshine leading up to it, only to find Saturday barely got light, with blanket cloud offering no sign of a let up. Had there been any hope of better weather, I might have been tempted to take up a kind offer of a trip to Hereford for some brambling shots, but I ended up sat in a cold hide at Venus Pools instead.

At least the grim weather hadn't put off the birds, who were feeding in their masses. Don't think I've seen as many chaffinches in one spot, and thankfully amongst them, were half a dozen bramblings. 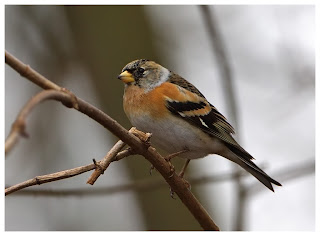 I took a few shots of them initially, as they fed from the ground, but reviewing the shots showed it to be a rather unattractive setting, and so I started watching branches around the feeders in the hope that I'd see some making their approach, stopping enroute. Took a while but they started to favour this route in, and soon I was then shifting my bum around on the bench in the hide, to try to angle the camera to get a clear shot of the birds, as and when they landed. 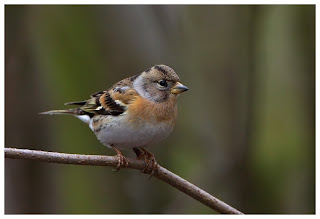 Bramblings really are vibrant with their orange chest and shoulders, and flecks of yellow and white down the wings. Just a shame the light was doing its best to dull everything down. However, as with a recent trip to see the short-eared owls, I had set the camera up on full manual mode, and while a few shots came out dark, any shots against a brighter backdrop were fine without having to try to over-expose and hence guess what was needed each time. 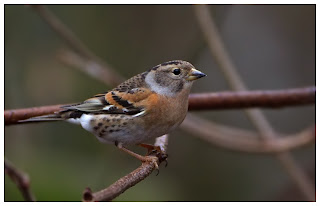 It also helped having removed the teleconverter, meaning I was able to get the lens open wide (F4.5 and even down to F4), to get whatever light available, in the camera. Worked, as the shots, while noisy and a bit dark straight from the camera, came up okay after a bit of faffing in my image applications. 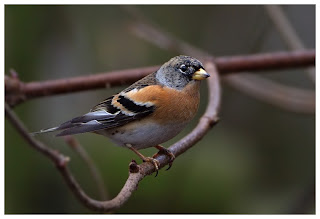 Sunday was spent on a golf course, and as usual, I found myself watching the woodland birds flitting around, though the best birdie of the day came when I chipped out of a bunker on a par 3, to see the ball bounce once and land straight in the hole!
Posted by Pete Walkden at 20:33 No comments:

At the start of 2010, I saw my first glossy ibis over in the marshes near Holt. Since then I have wished I'd had my big lens to have taken better shots, seeing as it was so accommodating. Well, after seeing some shots of one down in Berkshire (Dave Hutton), I was tempted to head down for a look myself, especially with the threat of sunshine for the first time on a weekend in weeks.

The trip didn't start well, with my satnav taking me to the wrong village! I thought it was weird when approaching the destination, not to have seen a single sign for Hungerford, and I soon worked out something had gone pear-shaped. Fortunately, it wasn't miles out, and I found the place manually instead. Technology eh?

Parked up and wandered to the reserve, and as Dave had warned, it was very muddy. Unfortunately, after the overnight rain, the river was high and there was no sign of the ibis. I think if the drive had been shorter, I'd have left, but as it was, I was determined not to miss out and give it as long as possible, and as hope faded (no-one had seen it at all), one of the locals reported that it had been seen further up-river.

Trudging through the mud, I made my way as far along the river as I could, and having now been joined by two other togs, we all searched together. No sign. I was cursing my luck when it suddenly appeared, flying over head, and so began the chase. We tracked it down to the shadows of the other side of the river initially, where we managed some shots, though the light was terrible, before a dog racing by spooked it further down river again.

Here it was a bit brighter, and we watched it hunting about in the shallows for food. At one point it managed to catch an elver, which took some wrestling to subdue and bolt down. 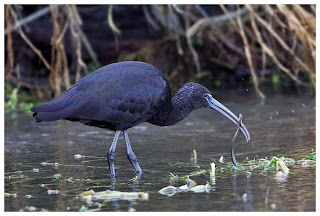 It was so tame though - we were stood within feet of it, yet it didn't seem worried at all. If anything, I'd have been better off with my 100-400mm lens, which I'd foolishly left sat at home. Being close was one thing, but getting some light was another, and thankfully at about 1pm, the clouds finally parted, and the sun lit up the scene, transforming the black bird into one that shone. 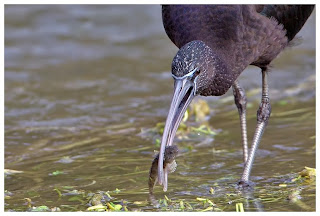 In this light, it really lived up to its name. Iridescent colours. Stunning. 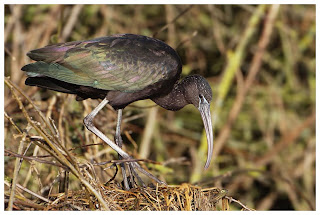 Needless to say, this made the majority of the hard-worked shots in the morning look dull and most have been binned, but I wasn't grumbling. To see one so close in such bright light was fab.

Eventually though, I decided to head off to find the other attraction locally, and thanks to directions from one of the togs there who kept me entertained during the day (Winston Churchill no less), I was soon parking up at a place called Great Shefford, and looking at a new bird. A great white egret. 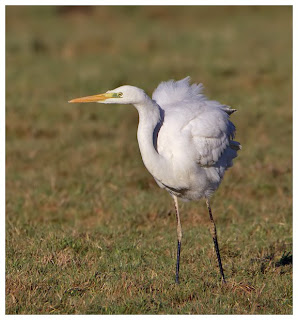 Stood amongst half a dozen little egrets, it really showed the size difference, and was rather elegant when walking around. Stretching and ruffling feathers, it gave a good show for a few mins, and I was glad I had arrived when I did, as suddenly it decided to fly off down the field, and dropped into the river below, not to be seen again! Well, not by me at any rate. 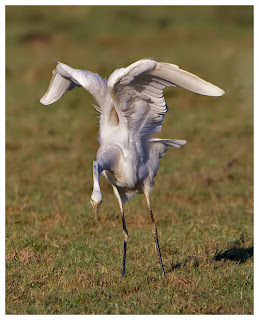 Despite the sun being out, it wasn't warm, and I headed back before dusk to the warmth of home. A very successful day trip.

After the chaos of the snow followed days when it seemingly never got light. Mist and fog loomed and when that cleared, there was still no sign of the sun. And so ended 2010, with me hardly going out during December. The New Year brought an almighty hangover, and so on 2nd January, I dug out my camera, and inspite of the weather, headed out for a look at a new spot in Staffordshire, which had been producing some good short-eared owl shots lately.

At the end of December, I had ventured over to Willington Pits, in the hope of seeing the long-eared owl, but it never seemed to get light and my word was it cold. I did see 2 bitterns, a barn owl and as darkness closed in, a shortie, but no joy on the main target, and no photos worth airing. Took a couple of hours for my feet to defrost too.

I arrived a bit early, and after photographing the sign for the meadows (always handy, so you can refer back and not get lost), I trudged over to the area recommended for the birds. There wasn't much about, apart from a few crows and a lone kestrel, though I was soon joined by Ken, Ian and Stu, which raised my spirits.

None of us were entirely sure where was best to stand, so we picked somewhere with a good vantage point over the area and hoped. As usual, hawk-eye Ian spotted the first owl, and we were soon watching it quarter the fields. At some distance... and it initially stayed that way. Landing in a small tree, the shortie was caught by surprise by a kestrel, which knocked it off its perch, as these rather blurred pics show. 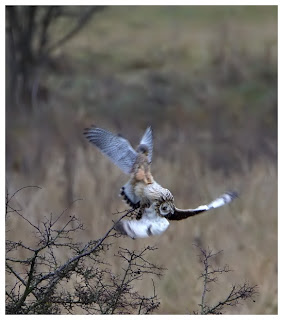 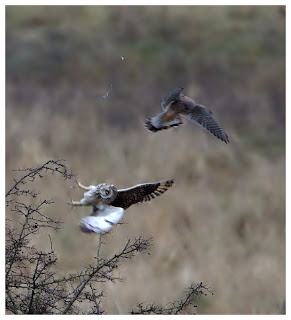 The bird soon disappeared into the undergrowth, and we didn't need to wait long for another to appear. By this time, I'd moved around from the others, gambling on a different spot, and it paid dividends. The owl flew right past me on a couple of occasions; too close to get it in the frame. Though me tripping over the tripod as I spun round following it, probably didn't help! 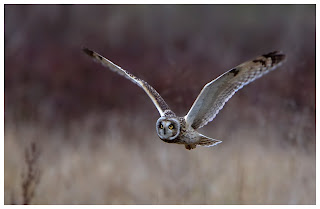 The owls seemed oblivious to people around, and at times looked like they were going to land on some of the walkers! 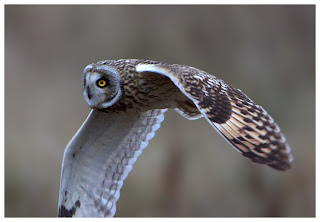 Sadly the light never really materialised, but using the manual settings for a change helped, and although the end results were a tad dark and noisy (it is a 50D!!), they were recoverable, and I got some reasonable images. 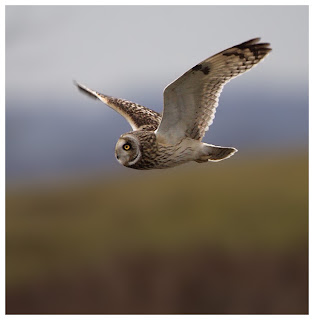 The owls were still hunting when we decided it was too dark for pics, and I stood nearby just watching one for a short while. Fabulous birds to watch and photograph. Just wish some would choose somewhere to winter, closer to home... or anywhere that doesn't involve the dreaded M6.