After seeing my first puffins at Bempton Cliffs last year, I jumped at the chance of joining some friends on Skomer, off the coast of Pembrokeshire, famous for having a huge puffin colony. The trip was all arranged via a forum I use (Talk Photography), so all I had to do was pay and ensure I was prepared for the stay on the island. Fortunately, others had been before, so they knew what to take.

Before going to Skomer, we arranged to meet up at Gigrin, to hire out the new tower hide for the red kite feeding session. This also gave me the chance to mooch around the rest of the farm, and as usual it yielded some gems. After last year's find of the spotted flycatchers, I was pleased this time around to find common redstarts and also treecreepers.

The new hide is spacious, allows you to set up easily, and gives a fine view over the field. That said, trying to swing a lens on a tripod fast enough to track an incoming kite isn't simple, and a lot of shots resulted in blurred images of sky and grass! Still, I kept trying and managed a few keepers, including some better shots (than before) of the buzzards that also enjoy the free feast. 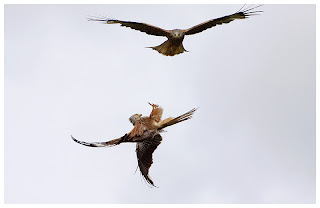 We'd opted to camp overnight before getting the boat to Skomer which was amusing, though sleep was at a premium given the snoring from neighbours! And then it was on to the boat in the morning, and tackling the baggage being taken. My goodness! It was like we were going for 6 months, not 3 nights! Ridiculous amount, but several chains were formed, and we carried the luggage on to and then off the boat, and up the steps of Skomer's harbour.

By this time I'd already seen hundreds of puffins though. They were everywhere! Fan-puffin-tastic! Ahem, sorry. After unpacking and waiting for the kind volunteers to bring up the luggage in their tractor, it was off to the cliffs to try for the puffins, in flight of course. The lads were right. They said it was hard to photo them, as they fly so fast and they certainly do just that! Like feathered missiles hurtling in from their trips, beaks filled with sand eels, being pursued by gulls, until the last seconds when they apply the air-brakes, and land near their burrows, ready to bolt down underground, to deposit the catch for the chick. 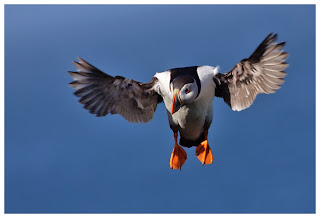 Then it's off out to sea again, a relentless quest for the next generation. Couldn't use the big lens, so my trusty old 100-400mm came into its own again.

Over at the Wick, I was amazed at how close the puffins were to us. Stood right at our feet, waddling past, grumbling and croaking, dashing to and from burrows. Such amusing little characters. I even glimpsed a chick! 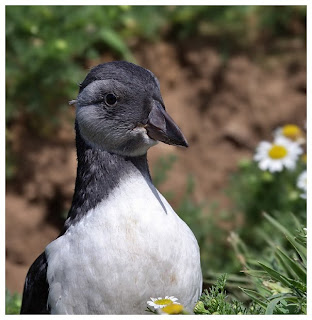 Puffins aside, there are plenty of other attractions on the island. Little owls live in one of the old stone walls near the accommodation, and they proved to be a challenge to view and photo, as they hid on rocks, amongst ferns and in dips in the ground. They had a pair of chicks though, so I grabbed a few shots of them too. 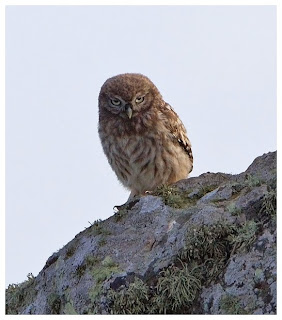 Whilst photographing these, I was chuffed (sorry) when a family of choughs landed nearby, allowing me to get some images of these rare corvids into my collection. Similar size and behaviour to jackdaws, but the call is more of a whine, and the red on the legs and beaks is so vivid. Great to see them. 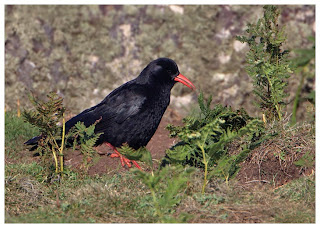 Another rarity I got to see, although generally in tragic circumstances, were Manx shearwaters. They appear to be top of the menu for gulls, as most of the time all we got to see was a trail of feathers ending with a pair of discarded wings and feet. We also saw a dead one that must have hit a wall when flying in at night. Did see a couple of live ones, as they landed in the dark, and hurried to their burrows. Not evolution's greatest achievement I think! And whilst waiting in pitch black for them to come back, we spied a glow-worm too.

Best of all though, and for me equalling seeing the puffins, were the short-eared owls. Not only did we see an almost fledged chick sat in amongst the ferns, but also a couple of fledged birds, trying to hunt, and landing really close by in doing so. 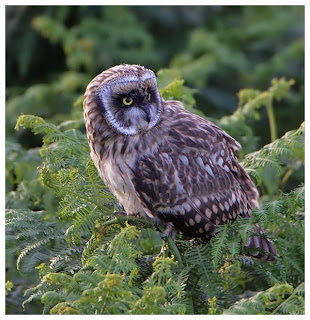 Looked quite sad as they bobbed their heads around in search of a meal, though as the parents weren't too far off (hunting) I doubt they'd have gone hungry.

Given the rabbit population on the island I was amazed to only see one pair of buzzards during the trip, though we did see several peregrines around, including youngsters which was encouraging. A safe haven away from pigeon-fanciers and their poisons.

Down at the shore again, I tried my hand at capturing razorbills and guillemots landing, and discovered I was as bad at them as I was at puffins, though being close to the sea allowed me some pics of them on the water, including some more puffins, of course; be rude not to! 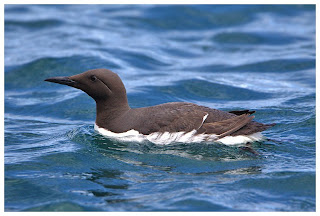 When it came to leaving the island I was pretty tired. Had made the most of all the time on the island, including the hours of darkness, and had taken thousands more pics. It's definitely a very special place to visit, and more so to live upon it, albeit for only a few days. I just hope I get the chance to repeat the trip.
Posted by Pete Walkden at 09:12 1 comment:

After seeing countless wonderful shots of the bluethroat at Welney, I decided it was high time I made the effort to see it for myself. Another early start and at just before opening time at the centre, I rolled up. Sun was shining and it looked to be a perfect day to be spotting rarities.

Paid my entry fee and hurried down to the hide where it was usually seen from, set up camp in one end of the hide (where swallows were nesting bizarrely) and scanned the area with my bins. I was soon joined by many more eager birders and togs alike, one allowing me to listen to the call, on his MP3 player.

So, on to my hatful of pics of this showy bird then. Hmm. Slight problem. In 4 hours of standing around, listening and scanning the area, I failed to see it. One birder and his son claimed to see it fly over, but I didn't and even my patience eventually ran out. All I'd seen that morning was a reed warbler, a pied wagtail and a pair of swallows going in and out of the hide. Typical. Ah well, I was in Norfolk and in no rush to head back. Hence I set SatNav to Cley and aimed for a favourite spot.

It didn't initially look great there either, when I arrived. The 3 main hides looked out on to rather barren lakes; sure there were avocets, but I can see those at the Flashes. Wandering back towards the centre, I was in half a mind to head home. Then someone I stopped to chat to mentioned that there was a spotted redshank over at the other hide. 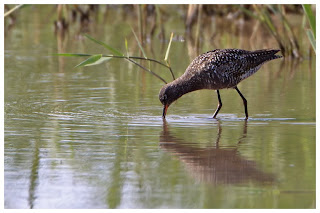 Worth a bit more of a walk I thought, and sure enough, there it was pottering around in the shallows, although the light wasn't in the best direction. So I decided to stay a bit longer. It was a lovely afternoon afterall, and you never know at that place what might show up.

While nothing rare showed up, a most welcome sound caught my attention... a pinging sound, and soon I was trying to "spot the beardie" in amongst the reeds. Had to wait a few hours before any showed other than in flight, and even then they were distant, but I got some decent views of a male, then a female and finally a fledgling. 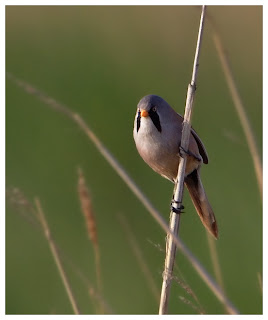 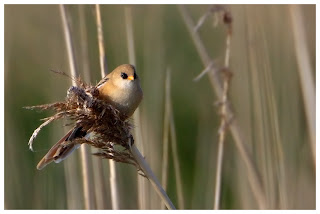 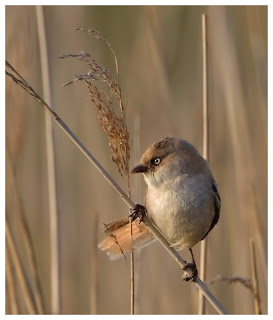 As usual I'm miles behind on this blog, so I'll try to be brief before my next main entry. After Scotland I had (still have) a huge pile of photos to process from the trip and this surely meant I'd stay in to sort them. Erm no. The middle of June is usually the best time to see common redstarts, especially at Cannock Chase, so this meant a trip out that way one Saturday.

Turning off the main path too early, I managed to end up about 2 miles from where I wanted to be, and on a hot day with a heavy camera, I wasn't best pleased, but the 2 hour walk around eventually yielded results when I heard the familiar call, and subsequently located the female returning to her nest in the base of a tree. 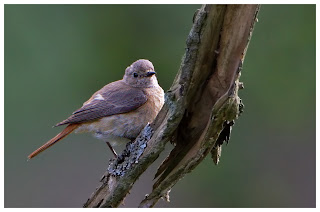 Moments later I clocked the male, and he was busy feeding fledglings that were hopping around below the ferns, calling for food, constantly. 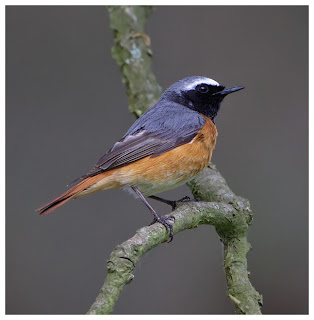 The light wasn't great and as ever, midges fed on me, but I managed a few reasonable shots, including a couple of one of the juveniles. 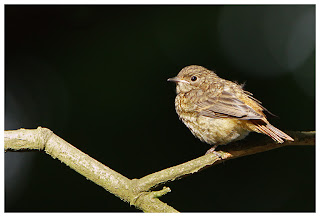 Lovely birds and I always make time to see them.