After getting up early, I was informed that the flight my brother was coming back to the UK on from Canada, had been delayed, so suddenly I found myself over at the Flashes on a sunny morning. The sun shines on the hedges around the feeder hide in the morning, so I headed that way. On the sailing pool was a kingfisher, which zipped off when it saw me, and over the field at the back, a kestrel hovered. 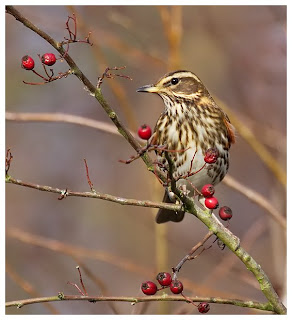 From the hide, I could see the usual blue and great tits, but I could also hear the calls of fieldfare. It took about an hour for them to arrive, but when they did, it was in force! Seemed to be hundreds of them, along with redwings, scoffing down the berries in the trees. Needless to say, I took my opportunity and a bag full of shots. Lovely to see their colours in the sunshine. 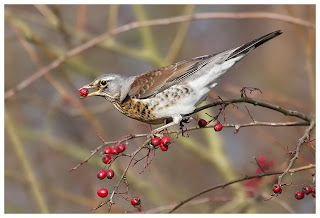 In addition to these winter visitors, there was the local gs woodie, and a few bullfinches, though only the female came close enough for a shot.

Over at the Moors, I couldn’t locate either of the bitterns, but whilst driving down to the car park, I spotted something scuttling along the ground. A red legged partridge. 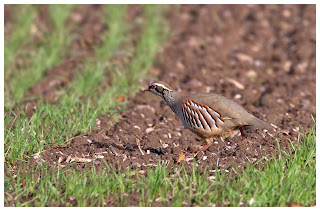 Not seen one of those since one legged it along the road in front of my car down at the Chilterns. Amusing looking birds, and they can certainly shift! Let’s hope it stays local... maybe I can get a shot of it in a pear tree, for Christmas!
Posted by Pete Walkden at 16:28 1 comment:

An embarrassing gap in my collection, considering the fact that these birds often winter near me, was divers. So hearing that some had arrived at Draycote was good news, though Kay reminded me that one has been at Chasewater for weeks. Oops.

Anyway, blasting over to Draycote is always a hoot, with the good roads that way, and even better when I spotted a buzzard sat in a roadside tree. For once, when I turned back, parked and started taking pics, it didn’t fly away! Well, not immediately... 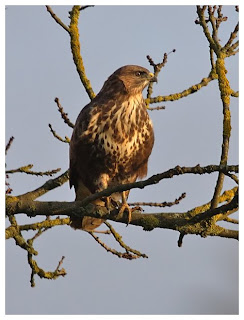 At the reservoir, it didn’t take long to spot one of the divers, a great northern diver, right in by the sailing club, and I was soon filling the memory card up. Walking along the bank, I also managed to locate the red necked grebe, and got some pics of that too, though they weren’t as good as my previous efforts on another bird back in January. 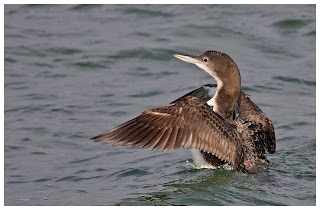 Back to the diver, I discovered that another one had joined it, and I managed to get some shots of them having a squabble, and then meeting up with a shag.
So the gallery has been updated, and there’s one less embarrassing gap in it! And I also managed to get pics of a little grebe and a carrion crow.

Having booked a day off work to prepare the house and garden for Saturday’s firework night party, I was hoping for a rainy day, but the weather tempted me away from my chores, and over to Upton Warren instead.

At the feeder hide at the Flashes, I bumped into Stuart again, who was still grinning ear-to-ear with his new 100-400mm lens, and we set about photographing whatever came into view, the highlights being a female sparrowhawk, a wren, a great spotted woodpecker and a few lesser redpoll. We also saw a bittern fly by, and drop down into the Hen Pool. 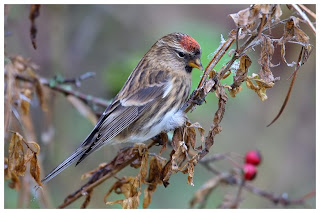 Over at the Moors, the car park was almost full, though most were in the East Hide viewing. I aimed for the West Hide, and from there saw another gs woodie, and more surprisingly, a tree sparrow. Alas it took off before I could swap my bins for my camera.

A quick view of the North Moors before leaving, provided some entertainment as a cormorant spooked a heron by fishing beneath its legs under the water, causing a few feathers to fly!
Posted by Pete Walkden at 23:20 No comments:

Despite it being technically warmer today than earlier this week (snow, in October!) it didn’t feel it, and the walk to the hide at Upton Warren was a chilly affair. Still, I got a warm reception as my ‘tog friends Ian and Ken were sat inside, hoping for luck with the bittern.

Within moments, Ian spotted it flying from right to left, towards the car park end, and we watched it crash down into the reeds. Then, rather surprisingly, a second one headed that way too. So there are 2 bitterns on the reserve! Splendid.

The kingfisher made the odd appearance, but not much else was around, unfortunately. Until, that is, I spotted the pair of bitterns chasing each other. Up and over the road, and down into the North Moors pool. Chancing it, I decided to jog (yes, me jogging – a daft sight!) down to the other pool, to try my luck down there.

Moments after getting there, one of the bitterns headed across the water, and into the reeds opposite the hide, and vanished in the blink of an eye. Try as I might, I couldn’t see it, and was about to give up when out of the corner of my eye, I spotted something against the reeds in the other corner. Yep, the other one had come out to play, and sat on some reeds, stretching its neck, and looking around. 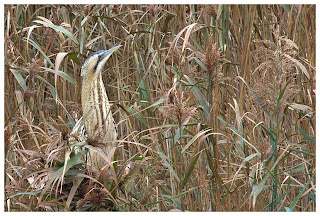 Joined by another birder, we both observed the bittern, glancing occasionally across to see if the other had come out, and I took a few shots. Alas, I made the mistake of looking at the camera, to check the images, and when I returned my attention to the bird, it had vanished.

Let’s hope I can get to see one of them when the sun is out – would be nice to see the colours in a good light. Fingers crossed...

Posted by Pete Walkden at 19:41 No comments: