Just a quick post on here to wish everyone who has taken the time to follow, read and comment upon my Blog over the year, a very Merry Christmas.

I doubt I'll be able to get out over the Festive period itself, what with family commitments, but I still have a small mountain of images from recent weeks to process and air. 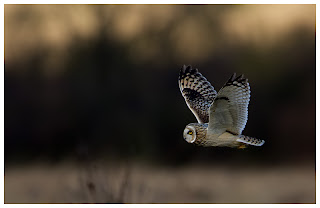 Back To The Owls

I didn't really need to find an excuse to get back over to Northants to see the owls, but with a streaming cold and tickly cough, and a work's Christmas Party to attend on the evening, it was quite tempting to stay in at home, in the warm. I didn't though, and drugged up to my eyeballs with anti-cold tablets, I was soon parking up at the site, which was already busy.

Stuart and Ken had arrived moments earlier and were busy setting up, and Karen and Paul were already set up and sat in their car, eyeballing the field for movement. I stuck the heated seat on and stayed in my car - no point getting cold before I had to. I just sat watching the others and seeing more folks arrive. Then a familiar face appeared in my side-mirror. It's a funny thing, with the likes of Facebook, that you can know what someone looks like having never met them. And while I'd met his dad before (down at Hungerford with the glossy ibis), I'd never bumped into Craig Churchill himself, until now.

Not wanting to be rude, I got out and wandered over to say "Hello". Craig recognised me too and after a bit of a chat, informed me that he'd just got over a cold like mine, but it had taken 2 weeks to shift. Great. We all then wandered over to where Ken had set up, and waited. Didn't take long to spot an owl - they were flying about over the fields in the distance, so hopefully wouldn't be long before they stirred in the field by us. 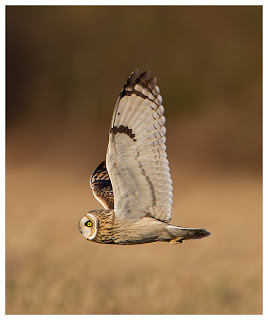 With a break in the cloud and some decent light, it was great to see the owls take flight. Not in as many numbers as when I first visited, but still half a dozen or so, still chasing each other and the crows, and still occasionally catching prey. 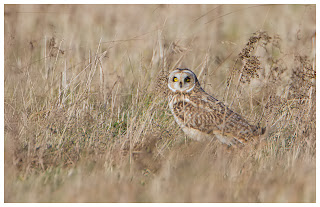 I think the numbers of people, or more likely the vocal volume of some, kept the owls at more of a distance than before. That said, by the end of the "show", my lungs were at bursting point, my eyes streaming and I was having to eat cough sweets like there was no tomorrow, to hold back the fits. So I probably didn't help with the keeping quiet problem. 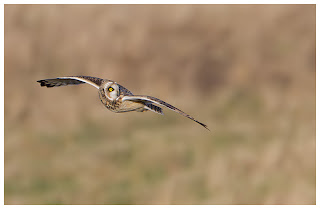 By then though, the owls had flown by several times, and while not as close as before, they still provided croppable shots. 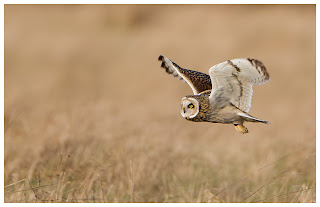 Also, I'd managed to get some perched shots, as one of the owls likes a prickly perch out in the field, to sit and view from. Not very close, compared to the Worlaby bird, but pleasing to bag, seeing as everyone else seemed to have got a shot but not me! 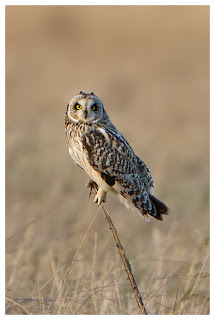 As is normal for the site, as soon as the sun dropped below the hill behind, the light was hopeless and we all dragged ourselves away. That said, the warmth of the car was most welcome, and I was pushed for time to be back home, changed and out to work for the party.

Good to catch up with the owls though, and great to meet up with familiar faces, even if their predictions for my ill health are proving to be true. I hate coughs.
Posted by Pete Walkden at 10:17 3 comments: