Stuck in Manchester most of the week on business, I was monitoring friends' movements from their blogs with envy, with Max's shots of the lesser spotted woodpecker really rubbing my nose in it.

Hence, as soon as I was back and able to, I shot over to the same spot and sat in wait of it... Would it come out as it had been doing? It seemed rather strange, as commented by another hopeful tog in the hide, that waiting for a woodpecker to appear in a reedbed was very unusual!

After a couple of hours, of watching a pair of wrens potter around, and three gadwells chasing each other on the pool, I was left alone to continue my vigil. It took another 90 minutes before I heard a strange sound from the edge of the reeds and there it was, pecking furiously at the stem of a bullrush.

Tiny! What a tiny little woodpecker. Ok, I've seen them before, but against a tree it's difficult gauge size, but here on this thin stem, it showed how very small they are. 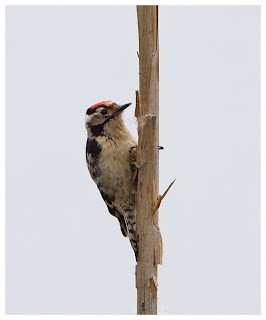 A male, with a vibrant red crown. 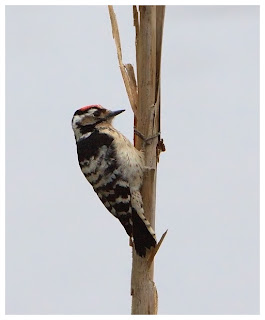 Just a shame the light was so poor, but I wasn't complaining after the wait - I was just chuffed to see it. 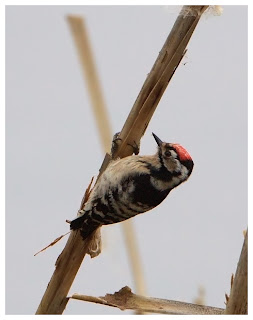 When a reed bunting landed behind it, you could see the minimal size difference, with the lesser spotted woody being only marginally larger. 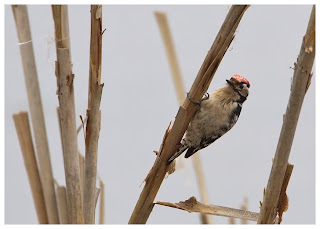 I waited for another hour after it had flown away, but the light got worse and despite the recent warm weather, the return to winter-temperatures encouraged me back home again.

Since the demise of my fotopic sites, I've been spending any available time in front of my PC, working on the new website. I've managed to add more galleries into the birds menu, plus additional pages for About, News, Guestbook and Links. Hence I've been seemingly slacking in the Blog upkeep. With work being so manic at the moment, any chance I get to go out and forget about that, I take, and I have headed into the woods lately, to see what I could find! No bears I'm afraid, but I have stumbled on other gems.

Twice now, I have wandered around the Wyre Forest, starting at Dry Mill Lane's car park, and strolling along the path towards Lodge Hill Farm, and beyond. I had hoped to see crossbills, but alas they failed to show for me. Buzzards a plenty though, and once I'd slid my way down to Dowles Brook, I spotted a dipper on some rocks downstream. Approaching quietly is almost impossible when the banks are strewn with dried ferns and you become entangled in brambles, but I seemed to be getting close enough for a shot, when I hear "BLIMEY, IT'S REALLY MUDDY HERE!!!!" shouted from a mountain biker, as though he was trying to communicate with someone half a mile away, instead of his mate, who was about half a yard back.

Needless to say the dipper flew off. Brilliant. After pulling various thorns from my legs, I followed, but it had gone. I had time on my side though, as I had been up very early, so opted to remain in the area, and it paid eventual dividends, when a pair of dippers flew back, and this time, without any foghorn-leghorn cyclists nearby, I managed to get some shots. 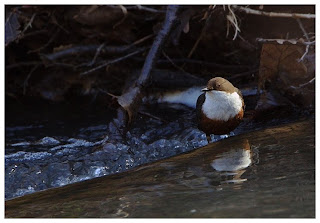 Ok, so the setting isn't quite the mossy falls of the Dales, but lovely to see, and now I know where I can find them, I ought to be able to get better shots soon. 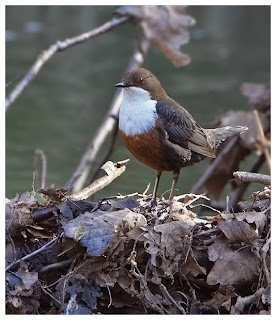 Also around the woods were siskins, redpolls, woodpeckers and very distant, a hawfinch. Another woodland area I love to explore is a Worcestershire Wildlife Trust reserve, called the Knapp and Papermill. If you've never been, you're missing out. The orchard area beside the river is great for woodland birds, such as tits and finches, plus wagtails and apparently kingfishers, though I'm yet to see one there. I did see though, and a close quarters, a treecreeper, scurrying up trunks, and under and along branches, as they normally do. 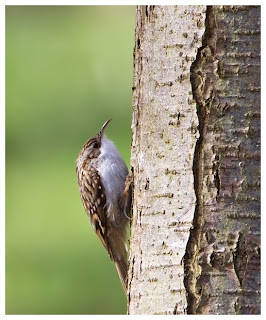 However this one did something I've never seen before - it flew off the tree, and caught insects mid-flight, over the river. Maybe it's been watching flycatchers? Impossible to photograph, but fascinating to observe.

Last but by no means least, is Whitacre Heath. The feeder hide in the middle of the woods is a fantastic spot for woodland birds, especially in the winter, where the food on offer brings them in by the dozen. 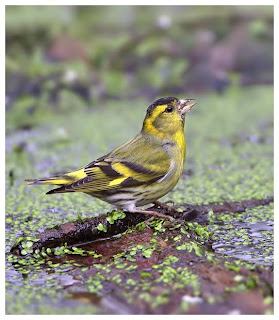 Here I managed to bag shots of redpolls, siskins, goldfinches, marsh and willow tits, plus a few shots of more common characters, like blue tits, after I spotted a shortage of decent images on my new website. 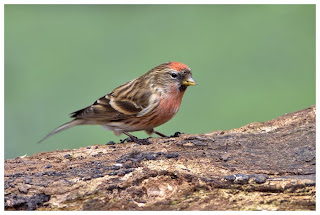 Amongst the lesser redpolls were a couple of mealy ones, which despite their size advantage over the lessers, were chased off the feeders by them frequently! 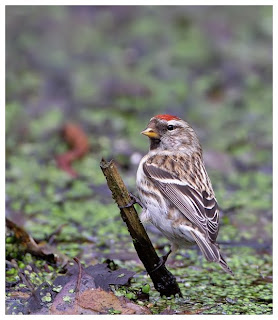 The highlight of the woodland session though, came out of the gloom like a bolt. I'd had to use just the 500mm lens without the TC, as the light was poor, but my goodness was I pleased with that move, when a sparrowhawk attacked, missed and then (at last for me) perched up nearby! Had I been using 700mm, he'd not have fitted in the shot, but at 500mm, it was full frame and glorious. 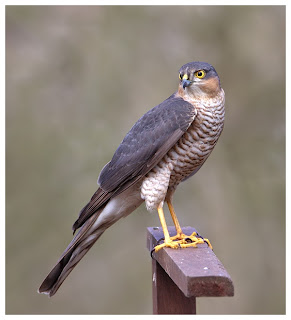 He even stared right down my lens before flying off. 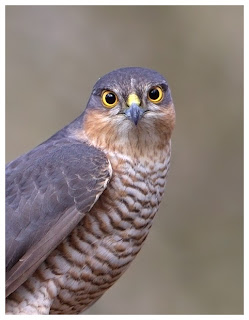 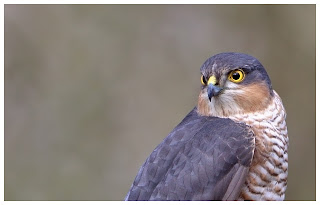 What a fabulous bird!

A short post regarding my websites, or lack of them as it would appear. Fotopic seems to have vanished, and I can't see any definitive information about what is going on anywhere online.

As such, my Birds, Wildlife, and 2 other galleries I maintain have gone, hopefully only temporarily. I'm not best pleased, given the number of images involved, not to mention information about where pics were taken etc.

Anyway, I'm not completely at a loss, as recently I set up a Flickr account, and have a lot of images over on there. It will be here that I add most shots of birds and wildlife that I photograph on a regular basis, and it will complement the small selection of shots that feature on here.

And, even more recently, I got my act together and sorted a proper website (www.petewalkden.co.uk), albeit in its infancy at the moment. This website showcases my best work; images I am really pleased with and also ones that folks could purchase, as I know the quality of the images are up to that task.

Both these websites can be accessed from the Links Section on this Blog.

Thanks for your ongoing interest!

As a rule of thumb, for weather forecasts I tend to check the various websites about 5 days before any time off (weekends and something called a "day off", which is apparently not possible for me at the moment, according to the boss, although he can take time off...), because I find the accuracy to be better than the forecasts made the day before. Based on this method, I'd worked out that the weekend wasn't going to be anything special, so decided to stay local.

This was possibly a bad move, as most people I know in the world of Bird Photography were heading to Lincolnshire for the short-eared owls, and this could have extremely annoying consequences if they all bagged wonderful shots. Still, I had managed a fair few recently, in good light, and wanted something else instead.

Getting Dad out of the house with the poor weather recently has been a challenge, but a couple of weeks back, he got out after I'd convinced him he ought to try somewhere new, and proudly showed me a few shots of treecreepers, goldcrests and best of all, red legged partridges, from a woodland in Warwickshire. Green-eye syndrome flared up, and hence I set off there, in the hope of getting some myself.

It wasn't a promising start, as it was pouring with rain when I left the house, and had barely eased by the time I parked up. By then, I'd experienced the usual with a perched up buzzard. See it whilst driving. Find somewhere to turn around. Park up nearby. Slowly get the camera ready and window open... and off it flies. I could scream at times...

Buzzard frustration aside, the sun did eventually come out, and after a couple of hours, the partridges also pottered out of the woods. Amusing characters, how they scuttle around, and they're fast when they need to be. You almost expect to hear them utter "meep meep" as they hurtle off. 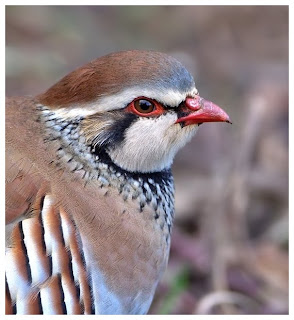 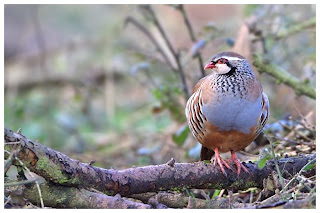 Also around were treecreepers, pheasants, a goldcrest, masses of chaffinches, but no brambling alas, woodpeckers and a couple of siskin, though they never came out of the shadows. 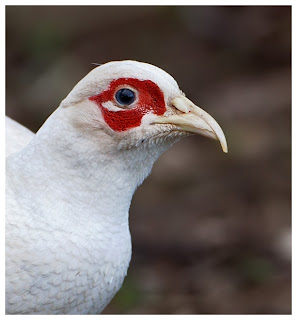 Of course the problem with woodland is the gloom, and birds have a habit of not appearing when the sun does, so I had to drop back to a mere 500mm, to get better speed for the shots. Some birds strayed too close at times, and I realised how much I miss not having a 2nd camera, with the 100-400mm attached. Should be back from repair this week though, the 40D. It got soaked at RAF Cosford last summer, and has gradually been failing since. New circuit board required. Ouch. Add that to the failed shutter mechanism, and the 40D has cost me a small fortune. It's a good camera though, when it works! 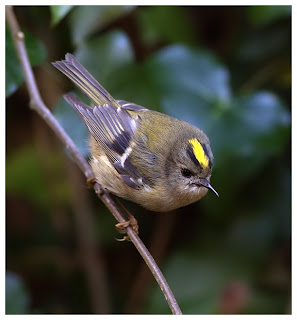 The icy wind finally got the better of me, and the heated seat of the car was most welcome on the drive home.

With a gig on Sunday night, I avoided the long trip up north, and as it turned out, it was a wise move. My friends waited all afternoon for the owls to show, but they failed to appear. A timely reminder that nothing in bird photography is guaranteed!
Posted by Pete Walkden at 10:40 3 comments: