Quick entry for last weekend's trips. Didn't fancy anything too far afield, as I've spent a lot of time driving lately and preferred a local trip instead. Hence, it was a couple of very short drives to see Little Grump, the local little owl, and an afternoon spent at Upton Warren.

Little Grump keeps changing his (I don't know if it's a he or she, to be honest) perch in the tree, so finding him is tricky, though with winter approaching, and the leaves of the oak falling off, he'll soon be easy to locate. 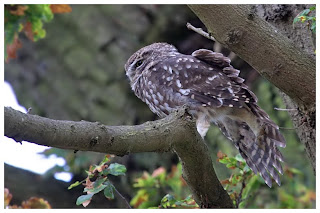 Was good to watch him preen and stretch, and while the light wasn't great (when is it?!), I still managed a few decent shots. I do like going to see him first thing, as it can be a good start to a day's photography. 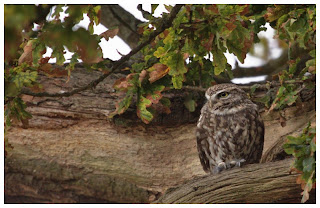 Upton Warren is usually fairly quiet at this time of year, but there has been a bittern resident over the summer, which adds an extra incentive to stay that bit longer. After seeing the bittern fly across to Amy's Marsh at about lunchtime, I relocated to the hide on the East side, to try for a better look.

Problem is, the very different angles from the hides makes it very difficult to work out where you were looking at from the other side, and it's not like a bittern is easy to see even when you know where it is!

Apart from the widgeon, a couple of snipes and a few teals, there wasn't much to see. I did get a distant view of a green woodpecker, and a sparrowhawk flew over the hide, but appeared black on the shots I took, on account of the poor light.

However, as I was about to give up, I spotted the bittern making a return flight, and yelled out that it was visible, much to the delight of a family of birders also in the hide. Made their day I think, as they'd not seen it before. 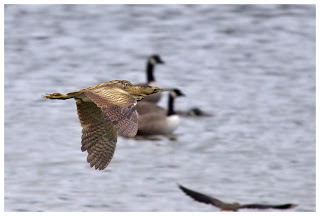 As before, I failed to relocate the bittern after it had landed, so I headed home. I hear now though, that there are 2 bitterns around, so it sounds like the wintering birds are returning. I can see hours being spent staring at reeds again, numb fingers and occasional moments of excitement as I spot these elusive birds.
Posted by Pete Walkden at 11:36

No joy for me with the bittern this morning though. Did you catch the weird goose-thingie?