While the barn owl remains an attraction, I'll be going to photograph it whenever the weather is favourable, though work commitments are getting in the way at the moment. So I'll try to limit comments on that somewhat to avoid being more tedious than usual.

Saturday was spent moving TV sets around as it was rather wet, and didn't suit my fair-weather photography. Sunday was better though, and I aimed firstly for a sighting reported from a business estate at Alcester. Being a quiet Sunday morning, I was able to trundle around the area slowly, peering over the steering wheel in search of the bird, which I eventually spotted sat on a warehouse roof.

A female black redstart, and by the look of the number of flies on the roof, in a perfect feeding spot. Quite a vocal character too, making a rather strange call between darting strikes on the sunbathing flies. 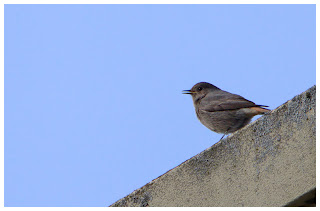 Alas with it favouring the roof of the building, and me lacking the ability to fly or stick to walls like perhaps Spider-Man, I could only make do with relatively distant shots unlike the bird that I saw at Coleshill last year. 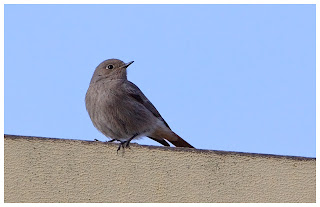 It didn't have the flies to itself though, as a pair of pied wagtails were around and perhaps they scared the redstart off, as after turning my back momentarily, to check the images were okay, I looked to find it had gone, and despite me walking all around the immediate area, I couldn't relocate the bird.

Following this, I headed over to the Flashes at Upton Warren, but the avocets remained distant and the little ringed plover did its best to stand in an area partially obscured by the fence. I did get some nice shots of a dunnock singing next to the hide, though I did feel slightly self-conscious using 700mm to photo something that could have been captured with my phone camera!

Leaving here, I found myself with several hours on my hands before the owl would come out to play, so I opted to trundle over to Shropshire, to see if the peregrines were around. They were. For about 1 minute, before belting off and not returning while I was there. Ah well, at least they're around and I'm sure will provide subjects later in the year.

Finally I zipped back to see the barn owl which was already hunting when I parked up, causing me to go into a blind panic, and then had to wrestle with the tripod that didn't want to exit the boot of the car. When it did, I was able to get some decent shots as the owl quartered the area, quickly catching a couple of rodents, and consuming them, before hunting once more. At one point the crimson stain of blood was clearly visible on one of its feet as it flew by. 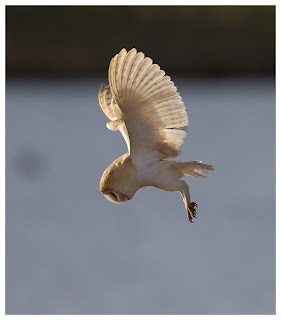 I'm still playing catch up on all the shots from recent weeks, so will be adding shots to the gallery each free evening I get. Hopefully this weekend the LRPs will show better for me, as I'd like some better shots of these. 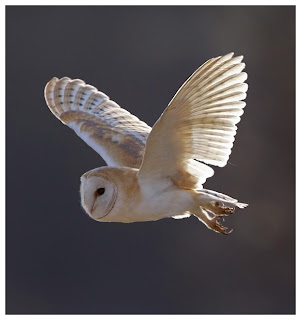