With Monday morning came cloudless skies and I took the chance to head over to Yarner Wood, at the edge of Dartmoor. To get good pics in woodland you need bright conditions. Getting out of the car we were met by a birder who informed us that the woods were alive with pied flycatchers and wood warblers, and that the pool by the road held a pair of male mandarin ducks. An excellent start though they only gave clear views later on when I returned to the car park.

Pied flycatchers are wonderful little birds that I seem to have decent success in seeing and photographing and Yarner Wood is a favoured spot for me to see them. Didn't take long to find a pair and we were soon both snapping away at them in the shards of sunlight falling through the woodland canopy. 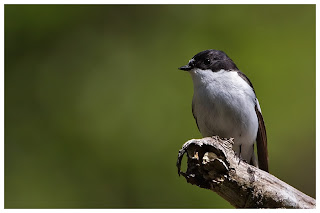 Moving further into the woodland, we located another pair and as the area was a bit more open, set ourselves up and waited. Was definitely worth it when the male posed on a great perch for us, and in good light too. We watched him catch insects and present them to the female, though this always seemed to happen in the middle of tree. 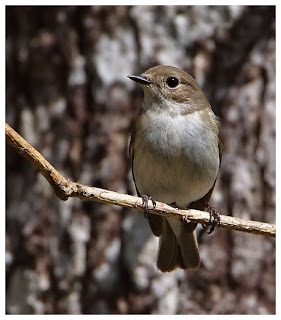 I assume the cold winter was to blame, but the heathland provided little of interest this year with no stonechats to be seen at all. Rather disappointing - love seeing these posers.

The woods held another target though, and I found myself nestled into the low-lying foliage on a valley slope, watching a wood warbler sing away in the canopy above. It was mostly high up, but after watching it for a while, I had spotted that as a part of its flight around its territory, it dropped down much lower, and it was here that I stood close by and hoped. 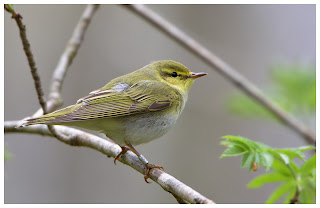 With gathering clouds and failing light time was against me, but just as I started to think my luck was out, down it came and I bagged a few very close shots. What a bright little bird it is and such a distinctive call.

Not quite Brideshead, but in sunshine this time and once more, the peregrines performed brilliantly. We had views of one perched for towards an hour, in bright sunshine against a glorious blue sea backdrop. However, we didn't have it all our way as we found out when reviewing the shots. The heat haze from the warm cliff face affected the focusing of the cameras and both of us suffered with very soft images in general, which was annoying, though we took that many shots, there were some good ones amongst the bad. Still, worth considering in the future if it's a hot day and things look clear through the viewfinder. 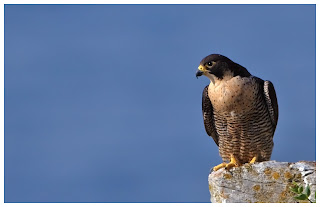 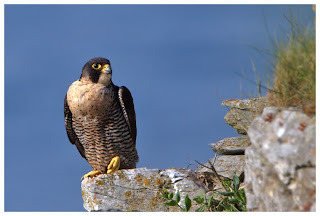 Recognising the call, I dragged Ian away from the falcon and over to a patch of bushes where a cirl bunting sat, singing away in the sunshine. I know there are supposedly better places to see these elusive birds, but this place never lets me down and this year was no exception. We watched it sing and also peck and eat the new leaves on the bushes, occasionally launching skywards to catch an insect buzzing around too close by. 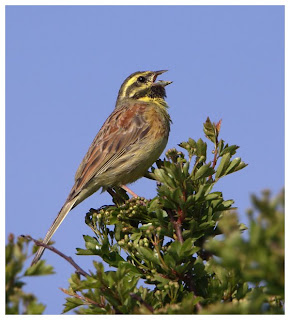 We left later on when the peregrines had disappeared off hunting again, but by then we were both tired and thinking about a pub meal and some beer (well, I was anyway!).

Excellent stuff Pete.I must go down there.

I've been photographing wildlife (mainly birds) now since 2006, so have an extensive gallery of images. Please use the links provided to see these.

Please feel free to add comments, pose questions and I will try to get back to you when I can.

All photographs are © Pete Walkden.