Despite Max's comments about the speed at which I walk along, those who know me, know how unfit I am, so the thought of climbing to the top of one of the hills in the Malverns didn't appeal at all, especially given I'd nearly keeled over climbing one of the smaller hills a week before only to see no birds at all.

This time however, the target was Lapland buntings and I was keen to bag some shots of a little bird I'd never seen before, but most photographers across the country had already snapped, annoyingly. Early start and after spotting Dave Jackson's car in the carpark, I knew I might have some help in finding the bird. But first came the hike up there. Camera and tripod over one shoulder, I took it slowly and even then, had to "take in the view" a couple of times from benches on the way up.

Also, after texting Dave, the news came through that he'd not seen the birds yet, the original small flock reduced down to just one individual now. Not another blank on the Malverns...?

Well, no. Just as I stumbled to the top of North Hill, Dave sent a message through - he'd found it. Now I just needed to find them, and luckily, they were just over the brow of the hill. And I arrived in time to have just missed it! A hiker had spooked it.

A quick search around and the bird flew back into view, higher up the hillside. I took some record shots in case, and then set about crawling as slowly as I dared, closer. 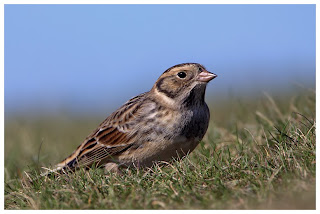 After a few mins, Dave had had his fill of the bird, and headed back down the hill leaving me alone with it. With no-one to upset if I ventured too close, I crept closer still and was amazed to find the bunting so accommodating. It was more distracted by passing birds, such as crows and mipits. 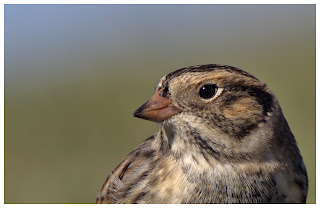 By keeping low, I managed to get the sort of shot I was after, with grass and sky in the frame, and a good depth of field too. 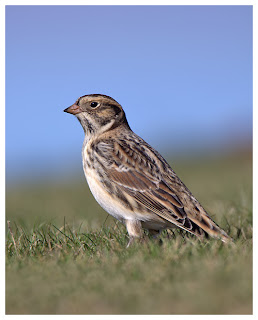 Eventually, despite the warmth of the sunshine, the northerly breeze encouraged me back down the hillside, and over to Upton Warren, to see the American tourist there - a juvenile pectoral sandpiper. 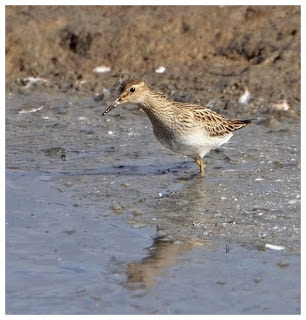 Unlike the bunting, the "pec" refused to come close and we (the hide was as jam-packed as I've seen it) had to make do with record shots of the bird. Nothing like so close as the one at Draycote last year. Still, a good one for the reserve and obviously popular with the locals!
Posted by Pete Walkden at 09:05

Excellent shots Pete.I'm glad it was still there after the climb with all your kit.