Since Mum died at the end of October, I've been struggling to find the enthusiasm to do anything much, and on top of that I've been suffering with a nasty virus, leading to a fever and a bad cold. I'm told that grief can lower one's immune system, so that figures. After a few days off work, I pushed myself back into that and as a result of it, decided that I really ought to get back out birding again, despite the weather and how grim I was feeling.

Reports of short-eared owls in Lincolnshire and friends' images of them were making me green with envy, but I just couldn't face the drive all the way up there, so looked for more local ones. Last year I had some joy looking at the owls at Cossington Meadows, but they've not shown up there (yet). However, 3 or 4 have been seen at a site in Leicestershire, not far from Rutland, so on Saturday, after failing to see Little Grump, I headed over to the site and met up with some friends who had also had the same idea.

My goodness was it cold!! Snow on the ground and a temperature below zero, made for numb fingers and toes in no time at all. Thankfully, after about an hour of waiting, 2 shorties appeared from the undergrowth and started hunting. 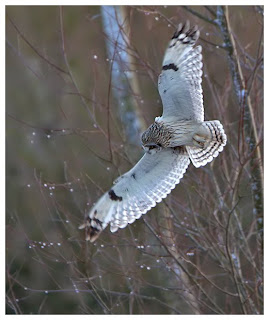 The area wasn't easy for photos though, as it's a plantation of trees, which meant the focus kept being taken from the owl and on to the trees, resulting in several pin sharp pics of trees. D'oh! 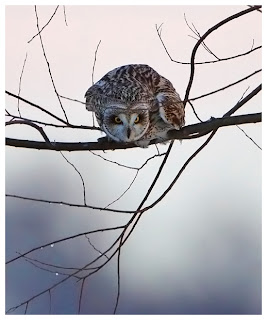 Occasionally though, it locked on to the shortie and despite the gloomy light and high ISO, I managed some reasonable shots. The best of them came when the bird perched up, firstly in a tree where it peered down like a big cat, and then later on a snow-covered post, making for a very wintery shot. 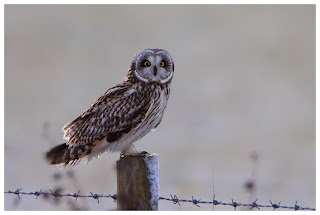 When the light faded too much for my camera to get any sort of shutter speed, it was definitely time to head home and it took about 2 hours for me to get the feeling back into my numb feet! I shiver just thinking about it now.

A good trip out and a useful spot to know about for the future. I expect I'll try to go again before the owls disappear once more.

Cracking shots Pete.I've never seen one let alone getting some shots.One has been seen at Brandon Marsh so fingers crossed but It will have to get warmer!!!

Love the shot of the one with wings open, makes the wings look fantastic!