The thing with trips like Mull and Norfolk is that afterwards, local sites seem a bit quiet. Add to that car trouble, and it's an effort to get out and about to take photos.

Not that the local sites fail to yield results - waiting in the "spider" hide at the Moors I watched in some amazement as a water rail, normally famed for their skulking nature, climbed up a reed to stand in the sunshine to preen! 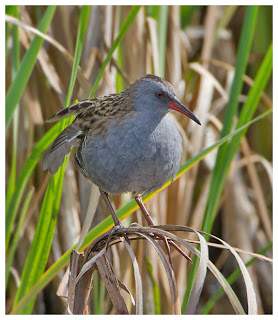 A family of wrens at Whitacre Heath's feeding station hide entertained me one morning, with their acrobatic antics in search of food. 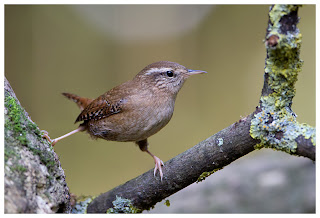 And splashing about in the small pool, albeit covered in algae currently, made for a challenging shot, when it was so dark all around. Thank goodness for the 7D's noise management! 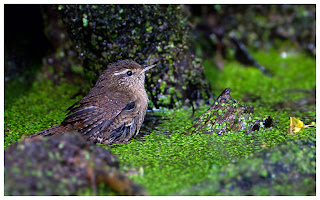 Seeing a good forecast for the weekend, I set my alarm for 6am, to force myself out to do something. There was a decision too, between going for a spoonbill that had been showing to folks at Draycote Water while I was stuck in work, or trying for a short-eared owl near Brandon Marsh. Knowing my luck with rarities at Draycote, and also the size of area to search, I put my faith in others reporting it, and headed for the owl.

Turned out I could have maybe seen the spoonbill, as it flew off at about 9:30am, though I'm not sure if it was posing as it had done... and I saw no sign of the owl whatsoever. Was it going to be one of those gloriously sunny days when I see almost nothing?

It could have been, but the day before on a work trip to Heathrow, I'd seen the usual flocks of red kites near the M40, so the temptation to try for some of these fantastic birds of prey dangled a carrot in front of me, and I was soon tootling down the motorway towards Stokenchurch.

Didn't take long to see them. Almost as soon as I drove into Stokenchurch, I clocked one circling at roof-height over the houses. Not sure what the residents thought of me screeching to a halt, and jumping out with a bazooka-lens, but I've failed to curb my enthusiasm over the last 5 years or so, and it's not going to happen any time soon. 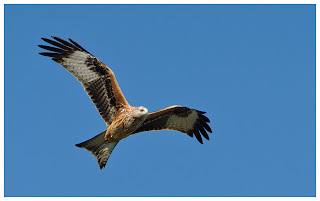 Moving into the centre of the village I was amazed to see these large birds of prey, flying around at the sort of height you'd normally see pigeons or blackbirds, around here. Must give you a bit of a surprise if you aren't used to them!

I parked up beside a pub on the Common, where another 'tog was already enjoying the action. After a while, I wanted to try elsewhere, as my aim was to get shots of some perched. I saw one perched up in a tree behind some posh houses, but the light was wrong and there was no route to get to where it would be more acceptable.

So, off on another magical mystery tour of the area, picking random roads, and hoping to stumble on to something good. And did I ever! A cottage, where the owner was obviously enjoying feeding the birds, and there were masses of them taking advantage of the free lunch. To add to it, was the sunlight behind me, clean blue skies behind the birds, and no wing-tags to worry about. 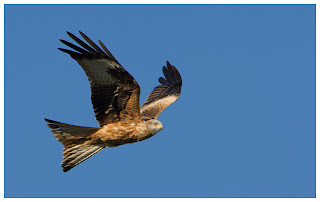 Diving, swooping, twisting and turning, snatching food off the ground or from one another, the entertainment from these birds was relentless and thrilling. In the strong sunlight, the colours and markings of the feathers were really amplified, and showed off how vibrant red kites are. 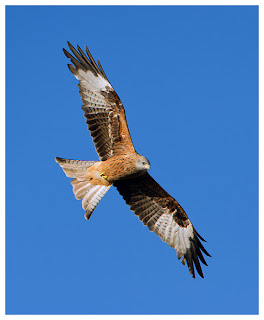 Also noticeable were the number of juveniles in the flock, with tan-coloured heads and orange eyes, compared to the grey heads and yellow eyes of the adults. 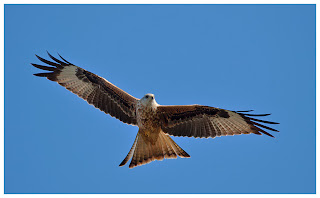 And it was great to listen to the calls too. I could have stood there for hours. I did, actually! Taking hundreds of shots. I know my neck and back are sore from contorting myself to get shots above me, and when the tripod-mounted camera could reach no higher (or more accurately my neck couldn't bend back any further), I switched to my 50D and 100-400mm lens, for some good old hand-held shooting.

Another drive around the lanes failed to provide any perched birds, but it did show me the number of attractive pubs in the area... must make a note to visit again, perhaps with someone in tow, to discuss kites over a pint of local ale...

So while the day failed to deliver the shots I wanted, it did provide many other fine images, and reminded me that you get nothing without putting in a bit of effort. Roll on the next weekend!
Posted by Pete Walkden at 22:56

What a fantastic account of a marvelous day! I love the Wren acrobatically perched and you can't beat those Kite shots. Great quality post as usual.

You missed the Spoonbill then.It's not often I get something you haven't!!!!!!