Rain. We've not had much of it lately. I know this because I'm British, and we love to moan about the weather. Normally it's because of the rain, not a lack of it, but a dry summer is threatening droughts now, normally at a time of year when we're wondering how much a bag of sand really costs. But on Friday, the prospect of rain on Saturday allowed me a rare idea of a lie in, and it was duely taken, though only until about 9am, when the other nagging idea of washing the car got the better of me.

A couple of hours later I'd got the car washed, and seen it get filthy again on the drive back up the road home (in the rain), got soaked putting bird seed out and cursed at one of the sunflower seed feeders breaking as I put it back up full... and was about to head back to a garden centre to get a new one when I saw a shard of sunlight. A quick check of the skies showed a breaking up of the clouds, and I was suddenly wondering where to go, at such late notice.

Lickey Hills. Not far away and I can usually take pics from the car. Whilst tootling up the hills, I recalled a report about bramblings, and promptly headed to the site. What luck, as I parked up, the flock was there, feeding on the ground, amongst the leaf litter. 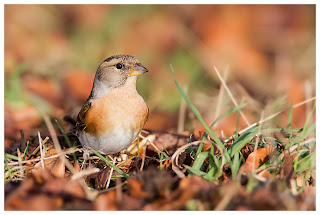 I love bramblings, as they initially appear (to me) as chaffies, but a second glance reveals their oranges and blacks... and brings a smile to my face. 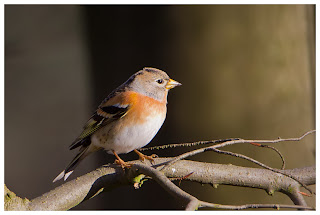 The setting sun behind me didn't, nor did the legions of dog walkers in the area, but I managed a few more shots of them, before they scattered to the canopy when yet another hound came bounding through. There were probably a dozen or so, amongst the flock of chaffinches, and they seemed less flighty than their resident companions.

Sunday was supposed to be brighter, and it was certainly that, at 7am when I threw open the curtains to see a blanket of snow over everything. After scraping the car and eventually finding my wellies, I was on the road for a tiny target, one I've not seen for ages. A firecrest, reported in a small copse near Penn. All I can say about the drive there is this - anyone who has to drive through that area daily deserves a knighthood for patience. Lights, lights and more lights. Always on red. Why there are speed cameras is beyond me, unless it's to catch someone attempting to end it all by driving into one of the red lights at speed...

Anyway, I parked up, wandered down the road and squelched through the mud to the trees and was rather pleased to see 3 people already on the bird. It was fairly high up in the trees, and trying to get the tripod and camera round in time to get a shot was hard enough, without all the twigs in the way. Lots of shots taken, at best, record shots achieved.

After about an hour, I was left to it, as the others had other places to see and after a further couple of hours I was beginning to think they had the right idea. Then, I spotted the flock of long-tailed tits that the firecrest had been following, and while I couldn't see it, I started tracking a goldcrest and started trying to get a shot of that. It was then that I clocked something behind it.

Low down and slightly darker green in colour, a quick glance through my bins and I spotted the eye stripe. Oh yes. Trying to get a shot, now that was another matter - they never seem to stop. Branches, air-shots, I was building a collection of such shots until the firecrest flew even lower, and to my right to the hedge. I couldn't believe my luck. 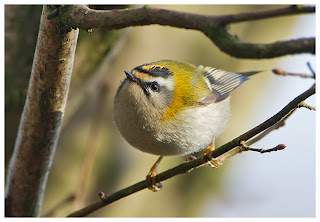 And it stayed still, for a second or so - maybe 15 feet away? 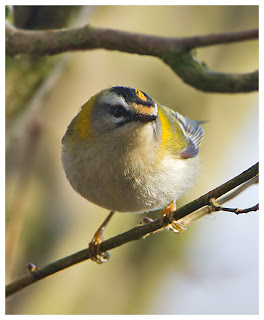 Didn't last and it zipped up and over my head, up into the trees again. I chased, nearly fell over in the mud and watched as it bounced higher into the branches again. I didn't see it again. And with my toes going numb in my wellies, I knew it was time to call it a day.

Except it was too early to end it completely, so I headed back to the bramblings, and despite it being a highway for dog-emptiers, walkers, bikers and later on, miniature horse-riding schools, I stuck it out, and eventually got a few more of this colourful winter visitor. 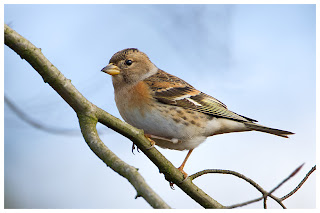 Definitely worth the detour before home! I'll be adding more of all the above to my Flickr site soon...
Posted by Pete Walkden at 23:01

Cracking Firecrest photos Pete. You did well to get them, Firecrests hardly ever stop moving!

What a lovely surprise! I'd love to see one of those.