Petty Excuses For Time Off

After returning to the UK from Lindos, and shivering for several days, I was only in work for a couple of days before having another planned break from it. This time, the reason was for attending a Tom Petty concert down in London with family, and we'd decided to make a mini-break of it, staying overnight in a Kensington hotel. Concert was fantastic - Petty still has a fantastic voice and the band were brilliant too, and the sound in the Royal Albert Hall was superb too.

But this isn't a rock music blog, so on to the three days after the trip. Friday, was as usual wet to start with, and after having a lie in for once, I chose to potter down to look for the little owls. With it being cloudy, the usual problem of their tree being backlit after lunch wasn't a problem, and as I parked up, I could see one of the pair sat out in the open, close to the road. Glaring at me, of course. 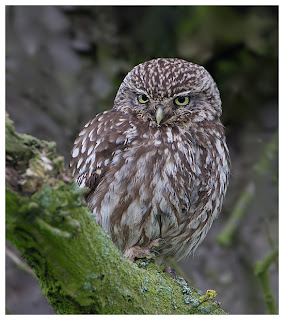 Minimising movements, I was able to get the camera lined up slowly, and then watched as the owl preened and posed, occasionally freezing when something caught its attention below. I had to stop myself from laughing out loud at some of the shapes it managed to create. 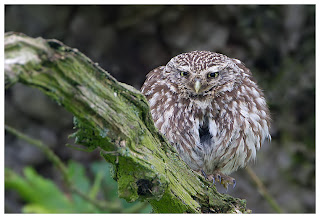 Saturday was miraculously bright, though very breezy and I had been trying to decide where to head all of Friday and even when stood in the shower on the morning. Gilfach, Bempton and Lincolnshire all interested me, but each had their issues. Wet weather was supposed to be coming in from the west, hence reaching Gilfach first, so that might be a trip too far the wrong way. Bempton is windy on calm days and a heck of a drive, and with rain and windy conditions possible later, the barn owl trip was also discounted. Then I thought of Max.

I wasn't in the shower by this time, before he starts panicking. Max has been visiting Napton-on-the-Hill and getting terrific shots of spotted flycatchers (when he gets his camera settings right). I went last year but had no joy, so decided to try again. Closer than the other three destinations too, and I was there in no time, parking up and trying to see the birds in the graveyard. Within five minutes, I'd clocked one dropping down from the leafy cover of an overhanging tree, and perching up on one of the older, weathered gravestones. 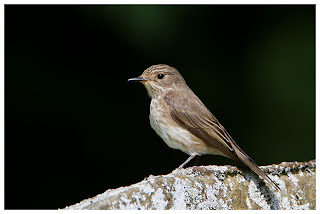 Bright it was, the strong and persistent wind meant where I needed to be stood to get the best lit shots, was actually rather cold, and it did strike me that I looked a bit weird (more so than usual) stood with a winter coat and woolly hat on, when only a stone's throw away, were several pensioners gardening, wearing light, thin summer clothes! Maybe it was still the Lindos effect making me feel chilled? 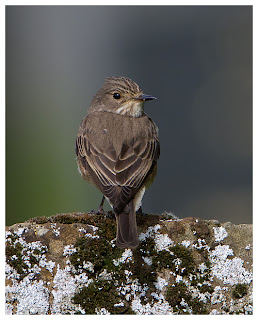 As usual, it was a case of being patient and trying to second guess where the birds would land. It is a good spot though, as the birds are generally well lit, and have a deep, dark backdrop, making them stand out very well. 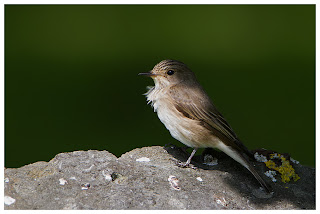 The wind got the better of my eyes though, and when it eventually rained early afternoon, I chose to go for a drive, not really knowing where I'd head. Maidwell, as it happened. I wondered what might be around when the crowds and most of the owls weren't about.

The tracks were as muddy and pitted as before, though my newer car copes much better than the old Fabia did, so that wasn't a concern. The fields were now full of growing crops, and those set aside for the owls were carpeted with wildflowers and long grasses. Lifting out of this, with bursts of song were skylarks, though they stayed well into the field, and out of reach of my lens. The hedges however, were closer, and these seemed to be favoured perching points for yellowhammers. 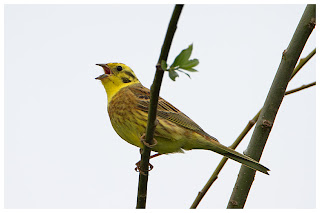 I did also see a pair of grey partridges, but before they could scurry close enough for a worthwhile shot, a pair of hikers spooked them, and they flew off, low across the crops. I'll get some shots of these game birds eventually.

I should really have had another lie in on Sunday, and when the rain started to pelt down on my hat, as I wandered through the wet ferns of Cannock Chase, I did question my sanity once again. This time I was trying for common redstarts. It's almost become a tradition, searching for them here each year, although this time I knew I was a bit later than usual.

It took a good couple of hours of searching to find, and even when I did, they weren't easy to keep a track of. It turned out that the chicks had fledged, and were also competent at flying, so the parents were encouraging them to move around the woods, often quite a distance at a time, without calling too, which meant one minute I thought I was getting close, guessing the bird might return to feed one of the young, only to discover ten minutes later that they'd all moved, and I had to resume the search. 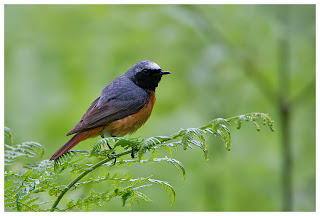 I wasn't going to give up though, and kept trying. Typically, when I did manage to get close, the sun would be smothered by dark clouds, or worse still, it'd start raining! 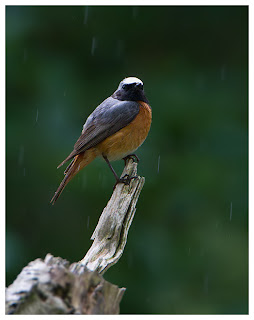 Still, it was good to see that despite the rubbish weather we have suffered of late, this family of redstarts had at least increased their numbers, and that's all that matters. 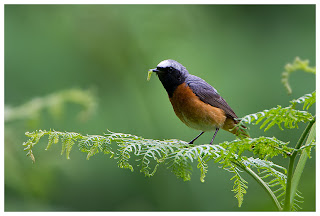 With hindsight, I should probably have stayed longer, instead of heading back to meet family and friends, prior to England's Euro Cup game. What a waste of time. But this isn't a football blog either, thank goodness, so I'll leave it there!
Posted by Pete Walkden at 22:40

Nice one Pete , just a little worried about what you think of in the shower though .

I was worried about the shower as well.
Great shots Pete.Glad you got the SF's at Napton.

Believe me, almost anything would be preferable to me singing in the shower!