After spending an hour counting the birds for the RSPB Garden Watch recently, I had been reminded by my resident feathery friends that my garden shouldn't be overlooked in favour of trips out and about all the time, so with the snow lingering until the weekend, I decided that Saturday would be spent in the hide, observing and photographing my garden birds.
Ensuring some of the feeders were full, I also sprinkled some seed and peanuts around the area in front of the hide, and broke off a few twigs I'd noticed would be in the way of some pics. So as not to disturb the birds after getting into the hide, I took a drink, some biscuits and an empty milk carton... 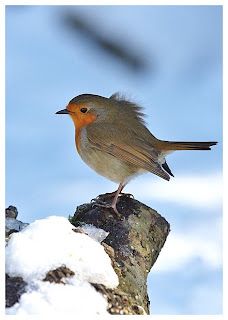 The first arrivals were the robins and blue tits. The latter zipping down from the hedge to grab a black sunflower seed, and dash back to the safety of the shrubs. The robins, being a little more bold, aimed for the seed on the ground, but still managed to hop out of shot each time I aimed the camera. They're also bullies, and consistently chased the dunnocks away, though from time to time they missed, and I got to see the hedge sparrows (another name for dunnocks) come out into the open. 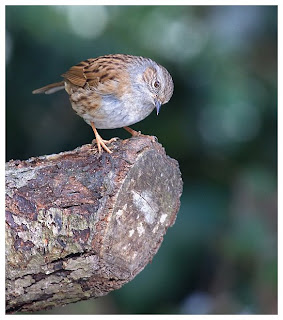 Not the most attractive of birds, but in the right light, the contrast of the rich browns against the grey head is appealing. Speaking of browns, the flocks of house sparrows had arrived, but they were very cautious, and kept flying off at the slightest sound, which when there's snow falling from branches, is rather often.

However on their occasional sorties, I did manage a couple of half decent shots of the males. Aside from the "sparrahs", there were visits from great tits, long-tailed tits bounded in, pecked at the suet, and bounded away again, a wren boinged amongst the undergrowth and there was a momentary glimpse of a goldcrest in the fir tree, though it soon vanished.
Flying over early on, was the local sprawk, which sent the garden into mute mode, but it never returned, leaving the local cats to annoy me by their constant presence. Also over went one of the great spotted woodpeckers, but it didn't stop. Shame - would have liked to have tried for some closer shots of it. And there was a first too - at the top of one of the trees, too high for a photo from the hide alas, was a fieldfare, vocal as ever. A great addition to the garden list, not that I have such at thing *cough*...
Remember I mentioned a milk carton? Well if you're planning to use such a thing to avoid leaving a hide to go for a number 1, then it's best to ensure it's been washed first. The smell of off milk inside a cramped hide really isn't pleasant! I'd forgotten a sickbag! 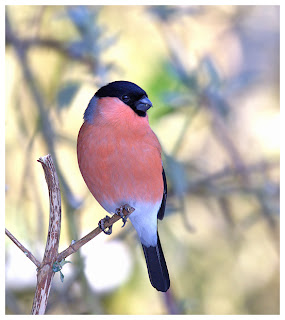 Anyway, back to the birds - the star of the show arrived quite early, and came and went several times during the 4 hours I was camped out for. Bullfinches. There's a pair that come to the feeders, and the male is absolutely stunning. They seem to like both the sunflower seeds and also the thistle, which has largely been ignored by goldfinches since putting it back on the garden menu.
While I didn't manage to get pics of all the birds that arrived, I did manage a few and they're either online or in the queue to be uploaded soon. I was most pleased with the bullfinch shots, but as a photographer, I always want them closer or in the sunshine, so I'll be out there again.
I also need to gain the trust of some of the birds, such as the pigeons, which despite being bird-brained, are aware of my presence and refuse to feed when I'm there. While this is good in that they don't hoover up all the food, I need them to be around to assure other birds that it's safe to feed. The starlings for instance, never really came out of the trees, and with their winter plumage on display at the moment, that's a real shame.
Posted by Pete Walkden at 09:25