Far too early for a weekend morning, I found myself driving down to Milton Keynes, for the first owl trip of the year. The sun was rising and made for some stunning wintery views across the snow-covered fields, though I couldn't afford more than the occasional glance, as the roads were covered with black ice. Parking up at the site, I was buzzed by a low flying sprawk, and watched it hurtle off across the road at a suicidal pace.
The sun was up by now, and everything had that golden light on it... pity there wasn't much about for photos. A kestrel darted from one of the trees as I wandered by, and a moorhen slid about on some ice. Along the hedgerow, I saw fieldfares, reed buntings, robins, great, blue and long tailed tits, and a few chaffinch dominated the dawn chorus, though they all kept well hidden in the branches.
On time, Ian and Joe rolled up, and it wasn't long before Ian's amazing sight spotted a barn owl. He must have been a buzzard or something in a previous life, as I could hardly see the barn owl with binoculars! Too far away for pics; it was something to watch while we waited for the shorties to show, and also for Ken to arrive, after his morning deliveries.
By about 11am, Ian was becoming apologetic, though why is anyone's guess. Birding is always about luck and timing. He had been to the site during the week and managed to get some stunning shots of a short-eared owl hovering near his car, and had recommended the site to us. But today, we'd not seen any, yet. As impatient as ever, I decided I would waddle on over to the area where the barn owls were (yes, another had appeared) hunting, and see if I could get anything from there. 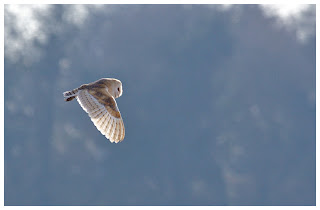 There was one barn owl perched in a tree, so I tried to creep along the edge of a field, to get a bit closer. In doing so, I managed to spook a short-eared own from one of the trees next to me, and suddenly it was game on! It flew over to the barn owl, then back again, and perched in another tree nearby. Superb. Needless to say, Ian was soon scurrying over to get some shots from the same location, while Ken and Joe opted for a different angle. This SEO was rather pale in colour - almost ghostly. 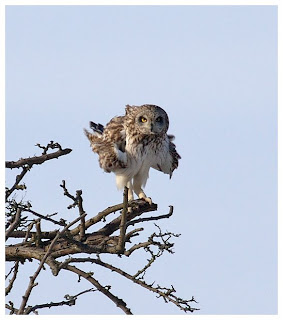 The day then transformed from a quiet, distant view of birds to being surrounded by them. We had barn owls hunting on one side, and short-eareds (possibly up to 4 there) on the other, occasionally crossing paths and performing aerial tricks to avoid each other. Both would arc suddenly to drop down on prey, though the camouflage on shorties is so good, they effectively vanish if you take your eyes off them for a second. 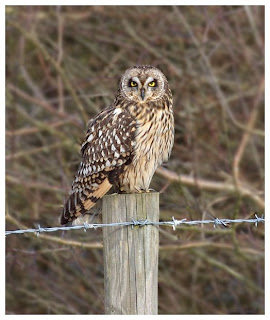 After a couple of hours, me chasing them around, and the others favouring a more static location (something more to do with their kit being so heavy to carry!), we met up again and decided to celebrate the day with a pint. This gave them a chance to rest their weary legs, and me to go through some of the shots and make room for the next session. 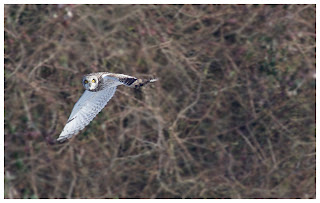 Sadly, the light had really faded with building cloud when we got back, and while we saw both barn owls and a couple of the shorties quite close, it didn't favour good pictures, so we opted to head home. A fantastic day out, in good company and at a place considerably more accessible than the other owl haunts I've been to.
Posted by Pete Walkden at 10:39

Great Owl shots Pete.Can you say where you go to get these shots?