Sunday started with a hangover - a rare lads' night out at the Peacock, and a skinful of Davenports IPA. By about 10am, the sunshine had gone and it was raining, and I found myself sat in the lounge, boots on but not laced up, looking out at the weather, and wondering if it was worth the bother of going out. Why not? Nothing better to do, other than Spring Cleaning. Upton Warren was the target, after reading that one of the bitterns had still been seen there on Saturday.

Looking chilled to the bone, Pam, Emma and the gang were just getting ready to move elsewhere, and they also confirmed the bittern had been seen, but not by them. The hide looked full, but I wandered in anyway. Within minutes of me entering, 2 of the chaps left (must change my aftershave!) but that left me with a mate, and the search for the bittern. 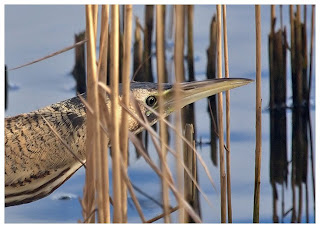 Took a while, but when we did see it, it was worth it. Initially we caught glimpses of it fishing in one of the channels, and it is very interesting to see how they hunt.

Herons hunt by stalking their prey, standing over the water, almost motionless, suddenly striking violently to catch it. Little egrets walk around in the water, swishing the bed with their feet, disturbing small fish etc which they then pick out, much like the herons.

Bitterns are quite different. When fishing, they seem to put their beak half into the water, almost as though they're drinking (what I previously thought), and wait patiently for a fish to get swim close enough to strike. They also eat frogs and toads, much to the dismay of the breeding ones, in front of the hide. I had got some pics of them, but it was fantastic to watch the bittern approach. 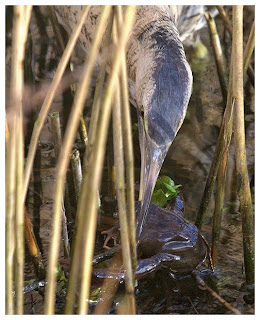 Firstly it got within range, and then stood still, but lifted its head up. Then, with its head still, it made its neck move in a wave-like manner, presumably immitating the reeds, Doing this, it then moved in for the kill, and in the blink of an eye, nailed one of the toads. But not without a fight! It had to flip it and get a better grip, with the toad's leg flailing desperately against the bittern's head and eye. Disappearing into the reeds again, we missed it consume the poor toad, but we did see the bittern wander off, back to the reeds again, to its favoured fishing spot. 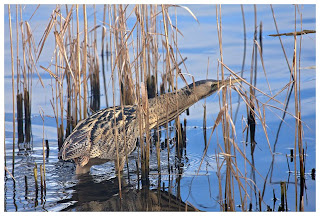 So I was very glad I bothered to go out, as I witnessed yet another wonderful birding moment.
Posted by Pete Walkden at 09:11

Carnage at the Warren!