Almost up to date on this blog now. Saturday was supposed to be the better of the days at the weekend, so I made the effort to get up very early and was strolling down the valleys of the Long Mynd in Shropshire by 7:30am. The sun was up by then and only the very bottom of the valleys was still shaded. It was a lovely refreshing morning, and there was plenty around to see.

In the skies above soared ravens, buzzards and a pair of red kites. The valleys were filled with the songs of chaffinches, tree and meadow pipits, willow warblers and the occasional robin (they seem to get everywhere don't they?). I even caught a glimpse of perhaps a merlin as it belted along close to the gorse and heather, too far off and into the sunshine for even an attempt at a photo.

With the sunlight reaching the tree-lined streams, I scrambled up and along one of the sheep trails on the side of the valley, and waited for the birds to come to me. First arrival was a willow warbler. It didn't come too close, so I had to edge along the narrow path to get a closer shot, but it stayed put for me, which made a change! 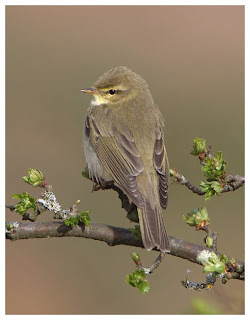 Further up the valley I saw the tree pipits again, rising high into the sky, calling out with their song as they spiralled back down to the odd tree scattered along the slopes. Typically, I chose a tree to stand next to, as it provided me with a bit of cover, and yes, the bird decided to land on the other side of it, completely obscured! Relocating though, I managed to (after a good 30 min wait) get some shots of it on the same tree, both posing and singing away. 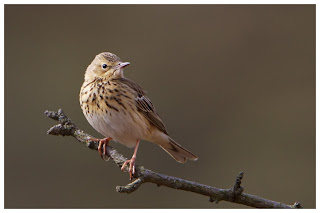 The walk down into the valleys is lovely. The hike back up the hill to the car is knackering, especially balancing the camera and tripod on your shoulder, whilst dicing with disaster along narrow paths. Still, I need the exercise, as someone keeps reminding me.

Back in the car, I set the SatNav for Lake Vyrnwy and parked at the end away from the main RSPB centre and dam, and went for a walk in the woods. Didn't take long to hear the familiar and very welcome call of a common redstart, though it only appeared very briefly and at a fair distance. 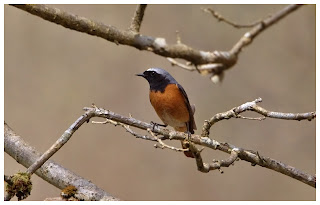 For some reason though (touch wood) I get decent success with seeing and photographing pied flycatchers, and it wasn't long before a female caught my eye. Hiding myself as well as possible, I just waited and was treated to some fairly close views of mainly the female, but then later a very short visit from the male. 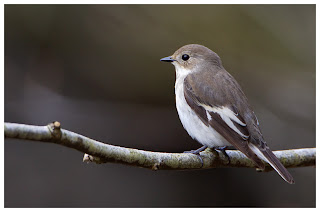 Such attractive birds with their huge eyes and simple markings. Hoping to see some more of these during the summer. Problem with woods by lakes though, is midges, and after a while their biting had tempted me to head back home. 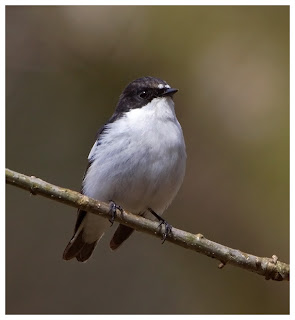 A good day out, albeit rather long.