Playing catch up again with this blog. Weekend before last, was an extended one over in Norfolk and Suffolk. Rob was keen to see a stone curlew, so Ian and I tagged along, though we were more interested in seeing any raptors over that way. Given the target bird, we opted to stay in the Swaffham area, as it is close to Weeting Heath, the reserve for seeing these elusive birds, and the weekend started well on the first night, when we spotted a barn owl quartering the fields near the B&B. Didn't stray close enough for pics, but a promising start.

Well, we saw them. That's about as much as I can say on this. The reserve features two hides which look down a field, which slopes away from sight at the bottom, and of course, this is where the stone curlews seem to favour. With the distance involved and heat haze, we could just about make a pair out, but the photos could have been of anything. And as there was little else to see there, aside from the rabbits, Ian and I soon got restless and wanted to go elsewhere.

Quite a spread-out reserve this one, with extensive reedbeds, lakes, wooded areas and marshes. The walk from the car park to the best spot at the far end of the reserve proved to be an arduous one, as both Rob (knee) and Ian (back) were unable to walk far, so we took it slowly, stopping when anything interesting appeared, and it didn't take long for a male marsh harrier to catch our attention.

Quite evil-looking birds with their hooked beak and dishevelled feathers, but fabulous to watch as they hunted over the tops of the reeds. Displaying with the females occasionally, though usually miles from where we had chosen to stand, or against the sun! Also on the reserve were bearded tits, though I only heard their pinging, failing to see them this time. And common cranes. Huge birds, gliding between grassy areas between the reeds.

And bitterns of course, not that we saw any, but for the first time in my life I heard them booming. A strange sound, like a distant sub-woofer thumping a slow, deep bass sound.

It looks like a reserve that could be good given time and patience and the birds in there, eventually they'd have strayed closer, but not for us that day. Nevermind, we can go again.

I visited this site last year, though too late in the season to see the breeding marsh harriers. This time though, we were at the start of such things, and after hiking around to the main hide, we were looking out across the reeds to see a pair of harriers bringing nesting material back. The light though was awful, so I went the extra few hundred yards to the farthest hide, which was empty and I could set up looking away from the sun.

Not a great deal around aside from the harriers, though the calm waters gave some good reflections of the geese around, and an oystercatcher dropped in for a few moments. 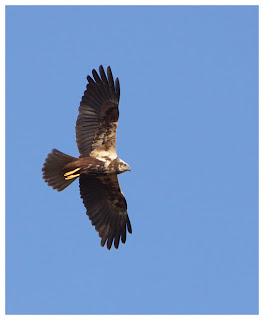 When the harriers did come by though, they looked stunning against the blue sky, and circled above the hide, seemingly enjoying the fine weather at last. As did the local buzzards, which drifted by on occasions, mewing as they went.

The final highlight of this visit came as I wandered back to the others, and encountered a pair of water voles feeding and swimming along the stream next to the boardwalk. I was amazed they didn't run off when I was so close (reading up later that they can't see more than 30cm in front of them, explains it somewhat!!), so I could get some great shots, albeit somewhat cramped in the frame. 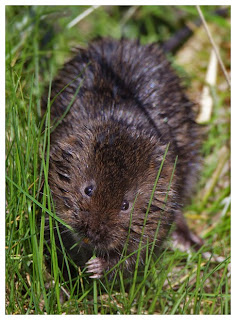 Having had some inside info on the location of spotted redshank, I dragged the others over to Morston Quay, and walked along the muddy banks of the estuary, in search of the bird. Nowhere to be seen, though normal redshank and oystercatchers were in abundance, along with very vocal skylarks and brent geese on the vegetation nearby.

I love going to Cley. Love the set up, love walking along the East Bank and love seeing the sea as you climb over the shingle at the back of the beach. Also love what birds can be seen there, and how close. This time we got great views of several avocets, redshanks and of course marsh harriers, though the latter decided to come in close after I'd opted to leave the hide and go for my walk along the East Bank. 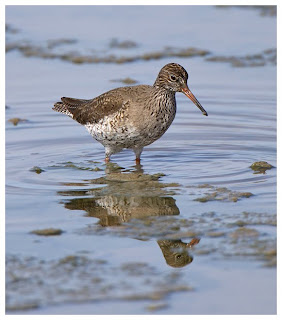 I spent a good couple of hours searching for the bearded tits and only had one chance for some shots, getting what can only just be described as record shots! Ah well, if it was easy, everyone would have shots of them!

The "Layby" as I call it, often yields results and our two visits gave very different ones. The first night we saw three barn owls and at least a pair of marsh harriers, yet the second night, only one very distant barn owl, and the harriers stayed well clear too. Always a good spot though, even just to watch the sun go down.

What a trek this place is! But well worth it. The Bittern hide has elevated views over the reedbeds and offers fabulous opportunities to photograph the birds and anything else around. We camped in the hide for a couple of hours from early on, and saw numerous marsh harriers, at last coming close to us for decent shots. There were at least two bitterns booming, and one actually flew over the reeds, albeit somewhat distant. A rough-looking muntjac also provided a subject for some shots, as did a Cetti's warbler, though that was beneath the hide and typically nigh on impossible to see. 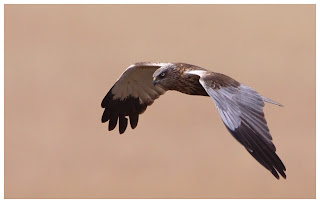 With the walking wounded wanting to stay put, I decided to see as much of the reserve as I could, and soon found myself wandering towards the Scrape area. Enroute I was reminded why I miss carrying my 100-400mm lens, when a stoat or weasel (couldn't tell with the speed of it) appeared from the edge of a pool, and stared at me. I was too close with the 700mm I was using, to get a shot, and the little sod kept popping up closer whenever I moved back for a shot. Had the trusty old lens been hanging around my neck, I'd have bagged some great shots. Curse those delivery companies for delaying it a day too late for the trip.

The hides at the scrape were very windy, so my eyes dried out rapidly, and I quickly moved on. The pools were a noisy frenzy of gulls mainly, though avocets, redshanks and the odd godwit pottered around between them.

The final hide of the day would be the Island Mere one, which was at the other end of the site. A good hide with a great view out over the marsh and reedbed, but very busy and badly timed by me, as the sun was in my face. One for the morning, me thinks. Still, I got fleeting glimpses of bearded tits, and marsh harriers soared over head. This was the site for the bittern, but it didn't appear for me, not that I'm short of such shots!

The only downside to Minsmere is the drive home from it. A-roads in Suffolk seem to be a bit of an after-thought, and it seemed to take an age to reach the A14. Still, took me past some very pretty little villages and ancient-looking windmills. An area to explore more, one year I reckon.
Posted by Pete Walkden at 10:38

Great report Pete.I know all those places you went to but I know a better spot for the Stone Curlews not that far from Weeting Heath. I'll give you details when you next go.