As much as I love watching and photographing short-eared owls, I was starting to yearn for a change of subject, and after another trip to the owls which ended up with no photos gained, I was pleased to see a text come through from Dave, about the desert wheatear on Clee Hill. He'd been up during the day, but the light was poor and wanted to return.

We agreed to meet as soon as possible after the bird had been reported, and he rolled up moments after I'd almost been blown off the side of the hill, having opened the car door to get the gear out. Dave informed me then that it was less windy than the day before! Unlike before, the sun was out, and a small crowd of birders observing the bird made finding it very easy.

Among the crowd were Chris and Bob, though I'm surprised I saw them at all, as both were clad from head to toe in camo gear! It was good to see them again, as it has been a few months since we last bumped into each other, and both are entertaining to talk to.

The wheatear, meanwhile was feeding on the steep slopes around the corner from us, so it was a bit of waiting game. Made easier mind, by watching the movements of the birders, who would suddenly grab their gear and head in our direction, meaning the bird was on the move.

Now Clee Hill is a great spot for wheatears in the summer, but obviously in the colder months they're somewhat missed. This made up for it, as it flew into view and started turning over small fragments of rocks, digging its beak into the soil and grabbing at insects and grubs uncovered. 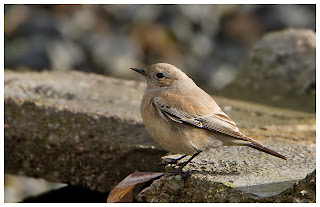 Between feeding, it would perch on something raised up, perhaps a boulder or a pile of rubble. 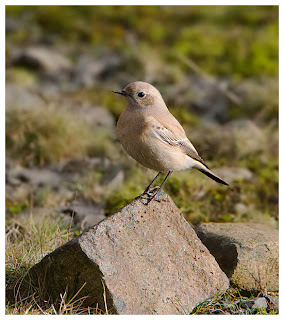 I think it was slightly bemused by the shutters going off, everytime it stopped moving! 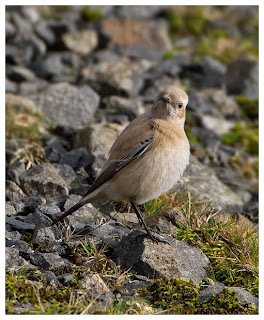 It came pretty close at times, but any movement seemed to spook it off, back to the slopes, and the waiting game commenced once more. 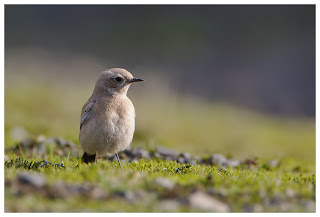 Whilst waiting we watched crows and ravens soar overhead, gliding on the breeze. An eagle-eyed birder then spotted a short-eared owl come in, from fairly high up, and it tried to land and settle on the top of the hill, but the corvids chased it up and over the top, to be lost from view. Plus we were treated to a brief fly-by from a female peregrine falcon.

Occasionally, when the wheatear took longer than usual to return, we'd go for a walk to try to locate it, but invariably we'd end up back where we'd left, to watch it fly in, hop around, feed and then zip off once more. 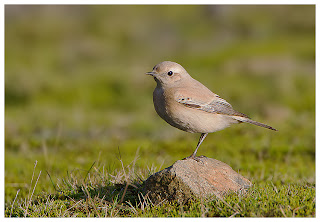 By mid afternoon, Dave had to leave to tend to his parrot (I kid you not!) and the wheatear dropped in moments later (as Dave said it would), for a last pose.

We followed it down the hill a bit, but I was by then also clock-watching, so said goodbye to both Chris and Bob, and left them to chase the wheatear, while I relished the shelter from the wind in my car.

A new tick for me, and pleasant change too.
Posted by Pete Walkden at 22:36

More cracking shots Pete.Glad I wasn't in that wind I could have been blown away.

I'm glad you saw and got some good shots of the Desert Wheatear Pete. It has been a lot more showy than when I discovered it in the late afternoon gloom on Friday afternoon.

P.s. was the Bob you mentioned...Bob Hart? (or Black Country Bob as he is also known)

It was Bob Hart. Was good to catch up on what he'd been up to of late.

I'm suprised Bob...went for it ...I believe he gets bad vertigo after visiting Clee!