The Shorties Are Back!

After dipping on the short-eared owls in Northants a fortnight ago, and then having to host a firework party and hence lose the whole weekend to that, I was itching to get out again to catch up with these winter visitors.

I had a choice, between a site north of Birmingham, which was closest, or another in Northants, which had more owls on offer. I chose the latter, mainly because a number of friends live locally, and were also going that way.

So just after lunch on Saturday, I arrived earlier than planned, and decided to go for a walk around the area - better than waiting in the car! Proved to be a good move, as within 5 mins of wandering along a track, I spotted a short-eared owl out, already hunting over a field.

Excellent. Getting close was a problem though, as there was no cover, so I had to wait for the bird to land, and try to creep a bit closer. Unfortunately, the bird chose to hunt a bit further away each time I did, so I ended up with some distant shots, though I did enjoy watching it successfully catch (and carry off) three voles. 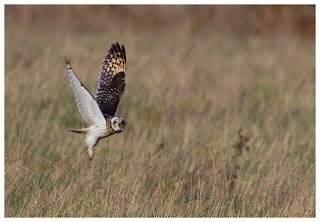 After an hour's hunting, the shortie dropped into the grasses and failed to reappear, so I stood watching the flocks of fieldfare cackling as they flew over in their hundreds. Then another stroke of luck, as a local birder arrived, and I got chatting, and followed him round to another field, where he explained, the owls generally gathered. 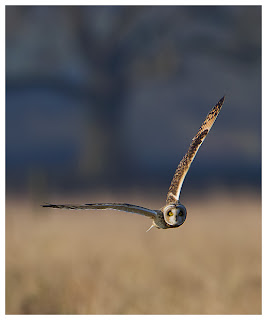 And did they gather! By the time we'd walked to the "best spot", we could see 5 owls out, and within 30 mins of that, there were at least another 7 around. I've never seen so many, and it was wonderful. Most of my friends had now arrived, but favoured the other side (avoiding the long walk) but Karen and Paul had followed me round, and were treated to an awesome display by the owls. 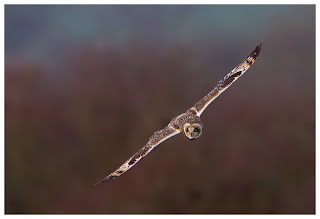 They were hunting, fighting between each other and also being chased by resident birds, such as rooks. 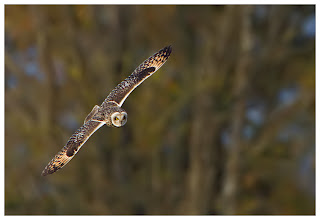 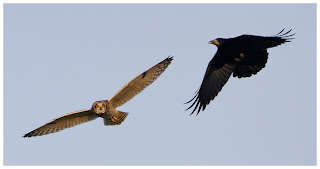 For about an hour it looked like the skies would clear and bathe the area in sunlight, but a big bank of cloud arrived to spoil the party, and it quickly went dark, leaving us all wanting more. But it was Saturday, so Sunday's plans had already been booked!

Sunday brought fog first thing, but by the time I'd collected Dad to take him along, it was sunny and looking promising. When I arrived on site, some of my friends were already there (keen!) and Ian soon joined us too.

Unlike Saturday though, we had a longer wait for the stars to appear, possibly because they'd eaten well the day before (Friday was very wet, so they would have been hungry on Saturday). 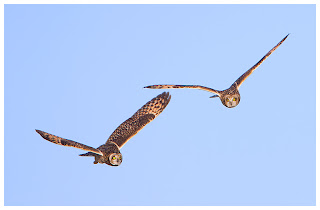 And when they did come out to play, they favoured the middle of the field, though on odd occasions they ventured a bit closer. Also noticeable was that fewer hunted at the same time. Not that they stopped squabbling! Was fantastic to watch them chase each other, sometimes forcing one to land, and then swooping down low, divebombing the grounded bird. 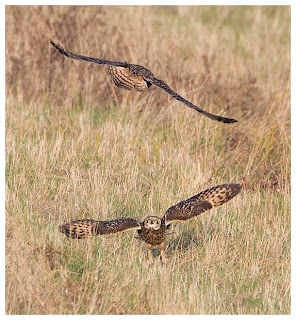 As before, the light faded quickly, and took with it our chances of more shots, but no-one was unhappy after a weekend like that. Needless to say, I will be going back, whenever I can to watch and photograph these magical birds.

Great to have them in the Midlands, and saves me driving miles up north to see them.
Posted by Pete Walkden at 13:21

Truly, utterly magnificent SEO photographs Pete. In fact, these are the best that I have seen. Wow. The high skill level is obvious in each of these splendid shots. People need to see these!

Great shots Pete.Cracking birds.You must give Dostill Lake a go if you are lucky they can come close.