Saturday started in rather a bizarre manner. I awoke to find myself still wearing my jeans and shirt from work, and thus it rapidly dawned on me that I had a) fallen asleep during that brief lie down mid Friday evening (long week at work) and b) that my contact lenses would still be floating around my eyes somewhere. And it was early...

After a couple more hours restless sleep I opted to roll out of bed earlier than usual. I'd made up my mind that as the forecast was decent, and I was awake early enough that I could feasibly make the trip to East Yorkshire, and finally, hopefully see my first puffin.

Bempton Cliffs RSPB reserve was selected on the Sat Nav, and off I went. By 9:15am I was parking up in the somewhat dusty car park next to the centre. The sky cloudless, sun blazing, I donned my daft hat and waddled off to the cliffs.
The first thing that strikes you isn't the sight of the gannets, gulls and kittiwakes soaring by, no, it's the smell. Ewww. Rotten fish. Delightful. The sight and spectacle of the birds though, and the sound of them soon made me forget (read ignore) the odour, and I was soon snapping away at the gannets.

Masses of them, crammed on to every nook and cranny of the cliff face. Circling above them were more gannets, plus fulmars, gulls and the odd brave jackdaw. 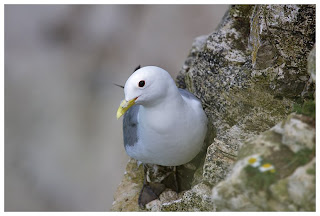 Bagging shots of gannets was one thing, but kittiwakes gave me the first new species of the day, shortly followed by guillemots and then razorbills. Walking beyond the end of the viewing area, I found a place right on the edge of the cliff where I could view a fulmar nest, the pair of them looking up at me curiously.

And then I spotted it. The bird, the little clown I'd been after. A puffin! Perched in the shade on a cliff face, not being exactly active, but even so... A PUFFIN! 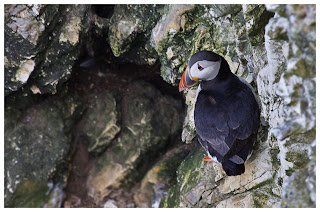 They're just as amusing looking as I'd hoped for. And it didn't take me long to spot more of the little characters, whizzing on and off the cliffs, albeit way too fast for me to get a shot from my lofty and distant location. 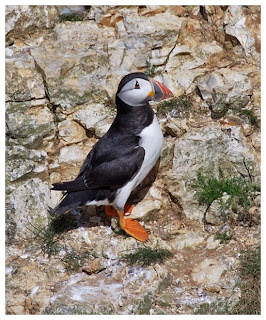 Walking along the cliffs, I spotted reed buntings and pipits, and another new one - corn buntings.


After a brief return to the centre for additional drinks, I headed back to the cliffs to walk the other way and watch the first puffin I'd seen. It didn't move much - just stayed asleep. Lazy so and so!


It was getting on a bit by now, and I'd noticed that my arms and lower face were rather red - both from the sun (eejit had forgotten sun cream!) and midge bites. So reluctantly I strolled back to the car, and set off on the treck back down the M1 home.


Not the easiest place to get to, but most definitely worth the effort.
Posted by Pete Walkden at 23:23

Nice report and shots Pete.I went last year and was impressed but struggled to get decent shots of the Gannets in flight.

Hi Pete - Sounds like you had a super day.Glad you touched base with the Puffins. Visited back in June on a similar day, put simply, Bempton "Takes your breath away". As you say, not esy to get to but definitely worth the journey.