After the disappointment of Saturday I was determined to get out on Sunday, and the Elan Valley sprung to mind. Great scenery, lots of wildlife and there's always Gigrin...

Reports of a spotted flycatcher at Holt church meant I could pop in there on the way out, and after working out where the church is, I was soon bouncing along the uneven concrete track to the site. Alongside the track, a kestrel hovered, but unbelievably, I couldn't stop because a car was behind me. Typical.

Around the church, masses of swallows, martins and swifts hurtled by feeding on the wing. Occasionally mingling with them, a hobby hawked by, though never really low enough for a decent shot. And then, as I scanned the roof, I spotted the target. Appropriate, spotting a spotted flycatcher! 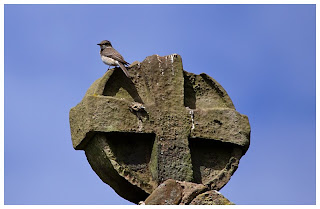 It led me on a merry dance, going from roof to chestnut tree to phone lines and back again, keeping a fair distance from me always. Took some record shots though, before it vanished into the trees. At that point Rob rolled up with his beast of an 800mm, and he set about locating the bird. Realising the time, I scurried back to the car and set off west, towards the valleys.

The original plan of seeing the lakes had to fall by the wayside, as I wanted to see the red kites being fed, and as I was so late getting there, I headed straight to Gigrin Farm. I've not been there since October 2006, so it was a welcome sight, the feeding session. 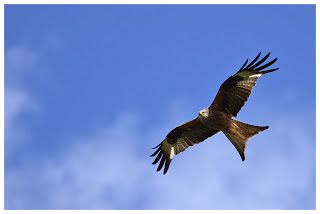 Not so welcome were the clouds which made getting shots of the birds swooping, nigh on impossible in the gloom. Still, it was fabulous to watch, and I took the chance to get some shots of the buzzards too. 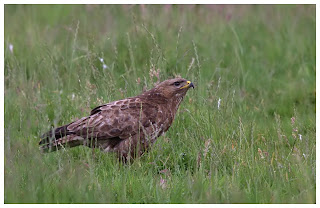 However, remarkably the birds of prey weren't the stars of the day at Gigrin. No, after the main event, I went for a walk around the farm and happened upon 2 families of birds. Redstarts and spotted flycatchers. Fantastic. 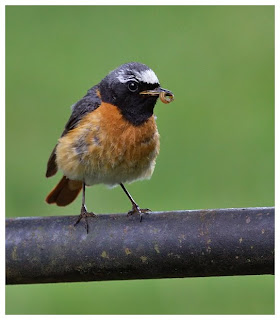 Okay, the light wasn't great and it rained every so often, but to be stood only a few feet from these birds as they bobbed and darted around for flies and grubs for their young, was amazing. 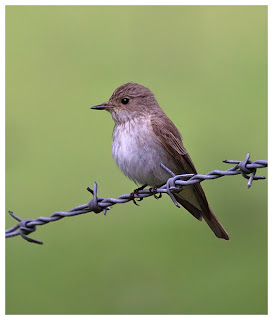 So the day started with a spotted flycatcher and ended with a surprise sighting, giving me by far my best shots of this summer visitor to date. Roll on the next weekend!

You do so well with Redstarts.Nice pics.Any Red Kite shots?

Cheers Max - yes, just added the shots of red kites and buzzards to my gallery, and a couple to this entry.