Those of you who follow this blog will surely have read about the foxes I failed to get any footage of recently, due to a camera setting issue. Since then, I have been keeping an eye on the garden each evening in the hope of seeing them again to try for some shots. But I wasn't expecting to spot them on a Friday morning, as I got ready for work!

As before, there were four cubs, though one seemed less inclined to join in and the mother, a vixen whose tail seemed to have lost a fair amount of fur since the last sighting. The light wasn't great so I dialled in 1600 ISO and opened the 100-400mm up wide, and started to try for some shots out of the bedroom window. 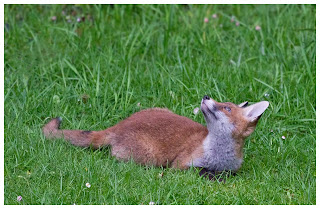 It was challenging to do, as part of me simply wanted to watch them play, and did they ever! They were chasing each other, round and round flower beds, diving into the shrubs, bursting out and leaping with that limitless energy of youth. 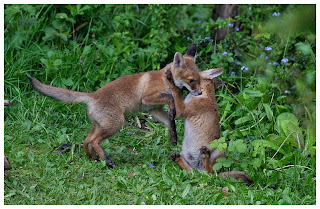 Mostly mum watched over them, occasionally following them when they vanished from sight, and stepped in when the play fights seemed to be perhaps getting out of hand. 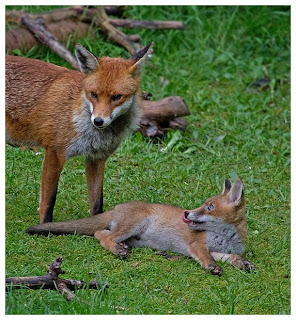 Then she decided to join in and chased her youngsters around the lawns at amazing speed, changing direction in an instant, easily catching up when she chose to. I have to admit I lost track of time and was late for work as a result, having to drag myself away from the action. 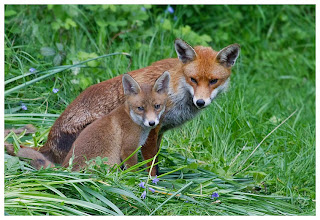 Urban foxes get bad press for isolated incidents, but you would have to be very cold not to have smiled at their antics, and at how adorable the cubs were.

I know they will face dangers from traffic, litter and other wildlife in their futures, but for that hour or so when they were in my garden, they seemed to be having the time of their lives, and I was very grateful to have watched them.
Posted by Pete Walkden at 20:53

Wonderful images Pete - I love the last one especially; little and large in tandem pose. Lovely.