Another wet Bank Holiday was initially forecast, but at the last minute, things changed and the weekend itself at least, promised some sunshine, although it was going to be cold. I had to turn down an offer of heading to the Elan Valley with Stuart, on account of having to collect a new(er) car. Typically, after finally deciding to keep the old one for a year longer after finally paying it off, one thing after another went wrong. Head gasket (caught early thankfully), radiator, then a puncture and the final nail in the coffin, the turbo failed.

So now I have a newer car, one that ought to be better for the sort of bumpy track I seem to find myself trundling down these days, and a bit more room for kit in it. And to test it out, as soon as I could, I immediately headed down to the area around the southern end of the Malverns. I like Castlemorton Common, though I called into Longdon en-route, hoping to see some of the rarities mentioned recently online. I'd have needed good eyesight, as I turned out I was stood about a mile from where I was supposed to, but spotted and photographed a kestrel, as it perched on an overhead cable. 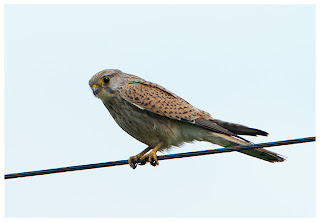 On the Common, sadly being a Saturday afternoon, it was infested with dog walkers, and everything worth photographing was miles off. I didn't take a single photo, though I was pleased to see my first cuckoo of the season.

An early start on Sunday and I was on Long Mynd before 8am. Unlike some of my friends who have amazing eyesight, I sometimes find my contact lenses refuse to sit right, and I can't get a clear view out of one eye. As I was about to get out of the car on the hill, I heard and then saw a red grouse flying in, so closed the car door again, and swung the camera over for a shot. Despite the bird being not that far off, I just couldn't seem to focus on it, so ended up rubbing my eyes and trying again. The camera seemed to focus though, as was shown when I looked at the LCD on the back. 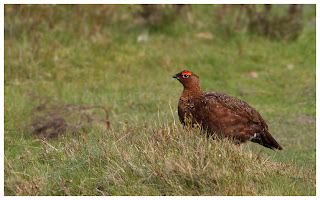 Oh well, maybe a walk would help clear them. Down into the valleys, hoping to see maybe a whinchat or stonechat. Saw neither. Lots of willow warblers, meadow pipits and chaffinches, but not a lot else. Near the top of one of the steep sided inclines seemed to be a fair amount of smaller birds, so in a moment of madness, I chose to climb (yes, with the camera balanced over one shoulder) up the hillside, clinging on to gorse bushes for grip. Took a fair time too, as I'm not exactly fit, and by the time I'd made it to the path, all the birds I'd been watching had either died laughing at me, or flown off. I did see a whitethroat, though it was as usual, too far to bother photographing. Luckily, the walk back to the car was dead easy, and along the way I spotted a pair of red kites circling.

Back in the car, I drove towards the gliding club, and stopped near some trees, to see if they held any surprises. A flash of red, with a flickering tail and I knew I'd found a redstart. Initially, it landed quite close, but again my eyes were playing up, and I had to trust the camera for the shots. 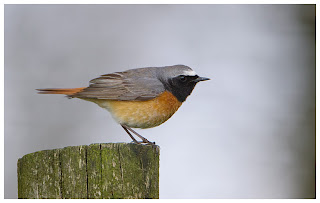 But with it being a Sunday, the road soon became too busy, with hikers, cyclists (who insist on talking to each other so loudly you'd think they were in the next county, rather than being 3 feet away from each other) and lunatic car drivers who hurtle along the single track roads without a care (or brain cell between their ears) in the world. So I got out and headed into the wooded area. I was glad of my hand-warmer and woolly hat, as within moments of leaving the warmth of the car, it began to snow! In May. So much for Spring...

As I crept closer to the redstart, the sun returned and I hoped to get a reasonable shot of it on one of the old, moss-covered broken branches. Suddenly, the bird flew off. I started to wonder if I'd spooked it when a voice behind me asked what I was looking for. Not one, but about 10 birders on a walk had seen me, and come into the area I was to see what I was up to. Without being too sarcastic I said I was hoping for a shot of a redstart, if I could get close enough. Obviously too subtle, as they then sat down behind me, no more than 10 feet away to have a picnic, and chatted loudly about where they were off to next, what they'd seen etc. I know it's a free world etc, but do I need to wear a big badge saying "I'm trying to photograph something, so please keep quiet and still"? Or maybe a reversible one that says "Just s*d off will you?" ;-) 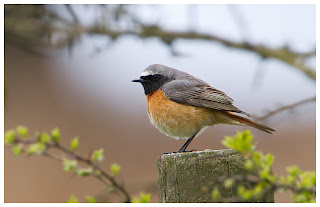 Anyway, eventually they left, and by then I'd gone further off, and with some patience, I got a couple of pics before the light failed, and more snow came down. 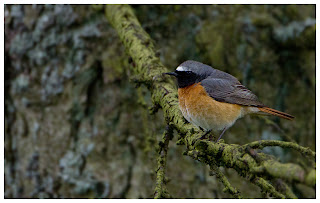 I was starting to get rather cold too, so thought it'd be best to head home. Later on the evening, I heard something in the garden and peered out. A vixen with 4 playful cubs, hurtling around. Hoping to get maybe some video footage, I grabbed the camera and put on the 100-400mm lens, and stuck it out the window. By then I was wearing my glasses, and seeing the camera fail to focus once more filled me with dread. Not another failure?

Well no. After a bit of testing, with a kit lens in the kitchen, I realised the camera was focusing fine. Then the penny finally dropped. The dioptric adjustment dial on the eyepiece had moved when the camera was resting on my car seat! What a prize plonker! Adjusted back to normal and everything was clear once more. I'm used to the Mode Dial on the camera moving when I have the camera on the passenger seat, but never had this issue before. Yet another thing to check before I can take a shot!! I need some sort of rig to hold the blasted thing in the seat now, to avoid such annoyances again.

In the words of a great cartoon character, D'oh!
Posted by Pete Walkden at 21:03

Superb images as ever Pete and a very enjoyable read. A strange question: Are you, or have you been a teacher at any point in time? I ask because your writing style is superb, and is packed with skills, as though you're writing to showcase what you want to teach! I'd show my class but the server won't allow me to use blogger!

Hi Christian - both my parents were teachers, so maybe it has come from them, but I'm not patient enough to teach, sadly. Maybe on a one-to-one level, for photography, but no more than that :-)