About this time of year I try to find any excuse to get down to the Somerset Levels to catch up with some of the resident and migrant species, and to put it simply, have a lovely walk in the sunshine. The latter of course has been in short supply lately, so with a sunny weekend forecast, I found myself parking up at Ashcott Corner at 7:45am, to make as much of the day as possible.

As I opened the car door I immediately heard the call of a cuckoo, and then seconds later, the deep, resonating boom of a bittern. The cuckoo was flying around the trees at the back of the boardwalk, behind the car park, but recent rains had meant the walk itself was closed due to flooding, so I took my usual favoured choice of heading to RSPB Ham Wall first.

The pools were bathed in morning sunshine and coots, moorhens, pochards, tufted-ducks and great-crested grebes went about their business, some still building or maintaining nests, others leading their young proudly around the edges of the reed beds, and of course the coots found something to argue over! This was all set to the strange and rather amusing chorus of the marsh frogs.

Up above, swifts, swallows and martins chased the flying insects, of which there were a few swarms, as usual attracted to me like flies around erm, let's not finish that line! Sharing the skies were one of my target birds, hobbies. Initially there was only one out hunting, but as the morning temperatures rose, numbers increased to maybe 8 or 10 of these fantastic, agile birds of prey. 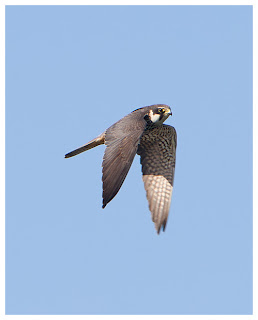 I set the tripod up and tried to get any shots as they came close enough, which was a rarity sadly, though I'm used to this, after spending hours watching and waiting for them at spots like Exminster Marshes over the years. Regardless of success rate, just watching them was great. 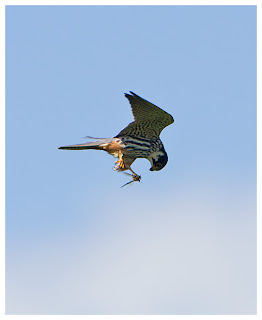 Eventually, my neck got tired of being craned backwards and I thought it was time to wander over to Shapwick Heath. While the bitterns at Ham Wall were booming, they were rarely flying - in fact I only got to see one flying, and that was too low to focus on, skimming the tops of the reeds. Maybe I'd see more on the other side.

Across the waterway in one of the lagoons were a few godwits and what looked to be a little egret springing around after food, in a rather camp manner. But by now the heat haze made anything that far off pointless photographing, so I continued towards the hides, where I could sit down for a bit and munch my sandwiches.

Just before the bridge, I happened to bump into a friend who had also made the trip down there, albeit even earlier than me (and I thought I was mad!), who then informed me that had I gone into Shapwick Heath first, I'd have surely seen a glossy ibis and seven common cranes. Unlike me though, she was chasing invertebrates, although coincidentally on a route that took her from one cake shop to another! Maybe I should plan my walks better, to end up at a pub?!

Just as I was starting to regret my earlier decision, a cry from behind us of "CRANES!!" grabbed our attention, and a glance skywards revealed a pair, miles up, circling on the thermals, calling out. They were a bit easier to follow than the hobbies, but so very high up, and were soon joined by a further three. I have to admit, their call is rather haunting, in a nice way. 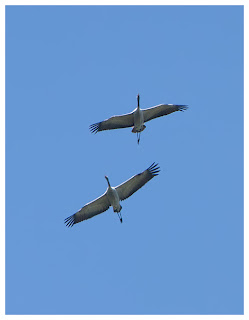 As they disappeared off into the distance, the lure of cakes was obviously too much, and I was left to head to the hides on my own once more, and my luck continued to improve as I entered the hide to be told I'd missed a bittern right in front, by about 3 minutes. With the hide full, I wandered out again and over to the other one, which was empty and I could eat and peer out in peace. The view of the Tor was fantastic - lovely to see it lit up by the afternoon sunshine. Aside from a flying bittern at distance and a few more hobbies, the view was a bit barren, and I decided to head elsewhere.

A squacco heron had been seen and photographed nearby at a place called Blagdon Lake, but details of exactly where to go were sketchy, and I ended up at the wrong end of the lake, asking locals where to go. Apparently I needed a permit, but there were loads of people down there and they'd know what to do, I was informed. I eventually found the small crowd, and was immediately put on to the heron, which was creeping around the edge of the lake, amongst wild flowers and tall grass, making it tricky to get a clear shot. 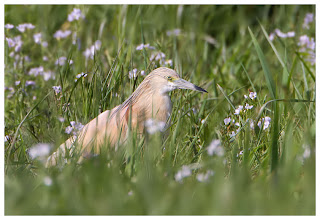 It was an usual looking bird, with warm sand-coloured feathers, and a crop of longer ones off the back of its head, much like an egret. 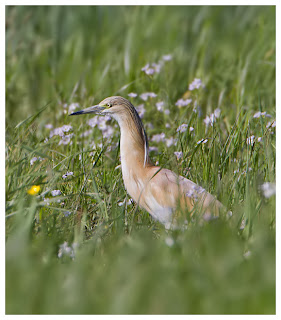 I had only been there for maybe 10 minutes when the warden arrived, and after admitting I didn't have the permit he was asking to see, he said I could get one from Chew Valley Lake, but then realised I was too late for that and asked me to leave. He did preach to me about checking details on the internet first, but all I'd seen was "Follow on-site instructions". The only on-site instructions I heard (or seen) were "You're trespassing, I'll have to ask you to leave!" Ah well, I had some shots, which was the main thing. I do think they're missing a trick though, by not selling passes to people on site, like places such as Upton Warren. So I upped sticks and left.

A kind couple who had chatted to me at Blagdon had told me of a spot with a barn owl, so while I considered heading back, I diverted to this spot instead. The barn owl was sat quite far off in a tree outside its box, but another helpful birder put me on to a dunlin, right on the edge of the lake. 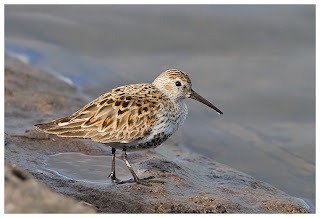 After that was scared off by a loony driver blasting by at ridiculous speeds, I waited for the owl to do something... it didn't. May as well have been stuffed! With a 90 minute drive home and sore eyes after a long day in the sun and breeze, I chose to head back. Another fine day in Somerset which as usual left me wanting more.
Posted by Pete Walkden at 23:18